Craving inspiration and travel, a chef’s quest for culture and culinary fusion highlights the need for silence to enrich it all

I have never been much of a city person, though I grew up in one. As a result, when I was living there I created emotional boundaries and buffers to cope and survive within it. But each reprieve, each escape to places with more silence such as woods and mountains, made it increasingly more difficult to return ‘home’ to that city environment.

I crave silence. I cannot sleep without it.

As a child, time spent at my grandparents’ house in the rural woods of the Poconos, bedtime was most silent. Darkness was so complete, I couldn’t see my hand waving in front of my face no matter how widely I opened my eyes. With bedroom door shut and windows closed, the silence embraced me — but we were strangers. My ears would ring and throb in the rhythm of my blood flowing through my veins. In the beginning it was hard to fall asleep like that, without the city hum of the Major Deegan highway below my window or the din of surrounding neighbors. It was jarring.

But as time went on, the silence became my long-lost best friend. My sanctuary. I even began to play games to see how far away I could hear noises. At first, I would hear the clock ticking in the next room. But my senses would move on… trailing off to hear the wind as it softly rustled through the leaves. Frogs chirping in the bog towards the back of the lawn. A car approaching a mile away as the road changed from paved to dirt.

Silence awakened my senses and awareness… and my needs.

When I went to Spain this fall on a solo travel adventure to refuel my creative juices — I was reminded of this need for silence in a place called Ronda, a stop towards the end of my trip. I had visited beautiful castles, cobblestoned streets, whitewashed pueblos and the red sands of Morocco. Each place bustling and busy, rich with sounds, scents and life — a tapestry of culture and culinary fusion.

But then in Ronda, weaving through tourist clustered streets, I found myself wandering somewhat aimlessly without an agenda; just turning left and then right again and again down the least populated walkways — until I entered a plaza that was so incredibly silent, it brought me to tears. The heat of the sun, the uneven cobblestones I could feel through the bottoms of my espadrilles, no voices, no sounds of cars. It transformed something within me. It woke me up.

Just recently, I had attended the John Cage Mycology weekend at Bard College. Cage is well known for his experimental music and art — and his love of mushrooms (music to my mushroom-loving ears!). He says, “I have come to the conclusion that much can be learned about music by devoting oneself to the mushroom.” (From Music Lovers’ Field Companion written in 1954.) His famous work 4’33”is four minutes and thirty-three seconds of silence where one is meant to observe the auditory sounds of your surroundings. Shuffling papers, footsteps, restless arms in jackets, sniffles, the gurgling of our stomach, rain on a window pane and so on.

Silence provides our ears, our bodies, our cells with a momentary gift to rest and recompose ourselves — to reconnect with our true selves.

It is the space where we can hear ourselves, our soul’s stirrings. For many, silence is a luxury. We are surrounded by traffic, construction, people, music, airplanes overhead, the evidence of life all about. But in this world of productivity and life set on overdrive, we need to consciously create it. Silence is oxygen for the soul.

~ Thich Nhat Hahn from Silence: The Power of Quiet In A World Full of Noise

If you want to tap into and nurture yourself and your creativity, create silence. And then find ways to sprinkle it throughout your day in as many ways as possible.

Consider a quiet meal — one without sound, without electronic devices, without conversation. Connect to your senses, the flavors and textures of your food, the sensations within your body, the sounds about you.

Create ceremony for yourself wherever you can. Light some candles and shut off the buzzing hum of electric lights. Close your windows for a while to shut out the outside sounds. Close the curtains if you have them, they will muffle the sounds even more. I believe snowy days are Mother Nature’s way of embracing us with silence. A blanket of fluffy white snow temporarily, yet magically buffers the noise of the outside world, almost immersing us within a snow globe.

Even consider choosing soft, gentle, warm and soothing foods like soup, oatmeal or mashed potatoes. They don’t call them ‘comfort foods’ for nothing! This month, I share with you one of the Garden Cafe’s most requested fall comfort meals, Lentil Loaf with Mashed Potatoes, Caramelized Onion and Mushroom Gravy. May it soothe your soul and remind you of the power of silence. Shhh.

You may also enjoy reading The Sacred Pause: The Art of Activating Healing Energy by Travis Eliot 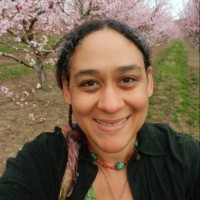 Christine Moss is the head chef of The Garden Café in Woodstock, NY. She is also an artist, poet and nature enthusiast who uses her skills to bring warmth and love to the food she prepares. Follow her on Instagram.