A radio ad blared over the supermarket speakers, and a pit in my stomach grew to the size of the melon I was sniffing.

We’re celebrating the 25th anniversary of Friends! Celebrate your favorite 90s TV show with us by sending in your favorite scenes and characters!

The melon wasn’t ripe enough for my upcoming fiftieth birthday celebration — a weekend away with dear friends — but the memory of watching Friends for the first time was as fragrant as ever.

I was twenty-something and living a totally different life than the glamorous group of friends in the show, with their huge Greenwich Village apartments and ample time to hang out in Central Perk.

I turned my attention to the grapes while a classic Hudson Valley sunset took shape outside the supermarket window, and tried to focus on the birthday menu.

When I was twenty-four, I lived in an ashram on the other side of the Catskills from where I live now.

“Didn’t you say your ex-boyfriend, or ex-fiancé or whatever, is a TV writer working on a new show about people in their 20s?” asked Vera, who worked in the ashram’s video department.

“Yes.” I said, proudly. After college he’d asked me to marry him, even though there was no ring or clear sense of what we were actually getting into.

“Because there’s this new show called Friends. It’s about people in their 20s. It’s getting really good reviews. Is that his show?”

I felt the stirring of a tsunami starting to crest inside me. But first I had to deal with the culture shock.

“Wait…How do you even know what’s on TV?”

“Well…errrr…” Vera reflected for a moment to see if it was okay to let me in on her secret. “Sometimes I watch when I’m working alone at night in the video department.”

I’d lived in the ashram without news or a TV for 14 months.

At a recent trip to the mall I’d discovered a new Madonna album had been released and I’d had no idea. Everyone at the ashram occasionally left to go to the mall or see a movie, but watching TV on ashram grounds, in an environment in which we abstained from meat, alcohol, entertainment and sex, seemed sacrosanct.

Vera and I were just returning from a little questionable outing ourselves, having walked several miles of country road, by modest cottages and colonies of bungalows, to the nearest restaurant: an Italian cafe with sugary tomato sauce and rubbery bread. We had been silent on the long stretch back towards the ashram, all talked out, bellies distended, bewitched by the cacophony of cicadas and crickets. At the edge of the ashram grounds we spotted a huge grey-blue bird perched on a branch spanning the banks of a stream.

“Wow.” Our words returned. The bird, looking like a T-Rex and pelican combo, stared at us before taking off. I’d never seen anything like it.

Then Vera asked me about what was probably my ex’s show, and a deep serenity was replaced with a swirling mix of pride, jealousy and insecurity.

“Come over to the video department tomorrow night and we’ll watch it!”

The office where Vera edited video footage of the guru’s talks for worldwide distribution was clean and modern, with newly carpeted floors and the faint smell of nag champa incense. The renovated parts of the ashram were nicely done. Even though we lived in austerity, we did so tastefully.

The choice to live in an ashram was more than an attempt to cultivate a discipline. I wanted to be enlightened.

I wanted to permanently center myself in bliss and equanimity so that I never again stared at a handful of pills wondering if there were enough to ensure that I never woke up. Moving to LA after college to make a go of the relationship with the writer turned out to be a disaster. The day I tallied the pills, I thought about one last resource I could try to make myself feel better before taking such drastic measures.

A year before, a guy who radiated a stunning stillness took me to his meditation center on a date. Everyone there, despite bowing down to a picture of a guru on a chair, seemed calm and happy. Maybe I could be that way, too. I sat down and tried to soothe the nameless ache in my soul by chanting some cockamamie version of a mantra they shared. And lo and behold, after just five minutes, a sweet, loving sensation swelled, and receded and swelled again. I opened my eyes feeling clear and infinitely better. A year and a half later I was living in the ashram with the mantra, the guru, and the practices that helped keep my mind steady.

At the ashram I’d remained focused and disciplined, rising early, meditating, going to the long morning chant and doing my seva — aka my job — as an admin to a department leader. My mind was less jittery, my identity as someone with irreparable damage was fading and even the guru herself took note of me. At one point I thought of becoming a monk. And then the guru went back to India. Without her presence, the straight and narrow path towards enlightenment grew wide and curvy. I started making little pilgrimages out into the happenings of the world.

For the most part, I was content. Then, I saw not only my ex’s name flash across that little screen in the opening credits, but his writing partner, also a good friend from college.

But it didn’t stop there. My high school acquaintance, Jennifer Aniston, lit up the screen. I had once been mistaken for her from behind: we both blew our curly hair into straight 80s bobs, and her well-defined derriere was a little less defined and more like mine back then.

And then there was David Schwimmer, also a Northwestern alum, whom I’d met numerous times at college parties hosted by the coolest of the cutting edge, avant-garde theater crowd. He always looked past me, having already decided that our meeting was of no consequence.

There they were. And here I was. In an ashram in a partially renovated Borscht Belt hotel, with probably only one cable box. The show was new. It was funny. People I knew were out there ‘making it’, successfully navigating a world that felt harsh and terrifying to me.

When the show ended, I wanted to run or hide, but living at the ashram I’d gotten used to having nowhere to turn but to myself.

Here I was, ego flaring, trying to digest an experience that showed me how little I had really grown. All the demons of jealousy and self-doubt were parading around on full display. But after the fog of inadequacy lifted, I saw something else: maybe, after months of serious practice, I was strong enough to make it out there, too. Maybe all those feelings were just a signal that my time in seclusion was up.

I stood on the supermarket line, on the brink of fifty with a shopping cart full of food: a mountain of abundance. Soon, I would celebrate with a group of amazing friends. We’d been there for each other in the good times, and also when our lives felt like they were stuck in second gear, when it started to pour, when it hadn’t been our day, week, month or year. My heart swelled as I emptied my cart onto the conveyor belt.

Suddenly, every minute that had brought me to this one made perfect sense.

You may also enjoy reading Finding My Way to We: How to Retain Your Identity in a Relationship, by Nancy Levin 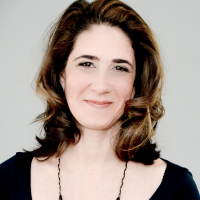 Blair Glaser is a writer and storyteller. In her day job as a leadership consultant, she helps leaders and teams learn the skills they need to communicate and collaborate effectively. Blair’s essays and articles on intimacy, leadership and authority have appeared online at Feminist.com, Huffington Post, Elephant Journal and more. Learn more at blairglaser.com

Previous Post: « Silence: Oxygen For The Soul
Next Post: Innate Wisdom: Reawakening Our Truth, Reclaiming Our Power, Changing Our World »