Fear comes in many forms… even dancing

My ex-husband used to tell me I looked like Elaine onSeinfeldwhen I danced. If you’ve seen the show, you’ll know what I mean (it wasn’t a compliment). If you haven’t, suffice it to say that she was probably the most embarrassing dancer in history. No wonder I have a lot of resistance about dancing.

Over the years, friends have tried to help me get over this resistance by taking me to dance classes. Each time I’ve ended up leaving before the end, crying in the parking lot while I waited.

So, finally I gave in. We ‘sort of’ danced, but it was traumatic for me as usual.

Aaron could tell how uncomfortable I was so, in his loving way, he suggested we take six weeks of dance classes together at the local community college. Reluctantly, I agreed and even bought special shoes — channeling my sister who always says, “I can do anything as long as I have the right outfit!” Unfortunately, I still couldn’t get past the trauma and ended up bawling my eyes out during the first two classes. The instructor barely knew what to do with me, let alone the rest of the roomful of adults. “I’m not going back there again,” I told Aaron.

This trauma was clearly locked inside my psyche. Aaron and I decided to work with a dance therapist he and friends of mine knew. “This is my biggest nightmare,” I told her. “I have a lot of resistance and fear about this, and I don’t want to feel scrutinized or humiliated.” I immediately felt safe with her.

She took us through a very slow process that began with swapping out the word dance for movement. She started by simply having us move separately with our eyes closed. I could be in my own world without being watched. With my eyes closed, I found that I could feel the music and let my body move the way it wanted.

Then she had us move together to do what she called ‘The Seaweed Exercise’. With our feet firmly planted on the ground, we took turns slowly and gently pushing each other’s shoulders, causing our bodies to move like seaweed. It was so profound for me to be touched in this way and to move as if I was underwater. I discovered that Aaron would fully support my movement physically as I leaned into him, and he found the same with me.

Of course, it’s a brilliant metaphor. Allowing Aaron to support me in this way also allowed me to ‘lean into’ connection.

Since my long-running story had been that no one would support me, it was beautiful to trust that he would indeed support me, through this movement and so much more. Not to mention that it began to release some of my trauma around dancing.

Earlier this year at my nephew’s Bar Mitzvah, one of my sister’s friends basically begged me to dance and then practically pushed me and Aaron out onto the dance floor. Something strange happened. The habit of feeling fear, humiliation and embarrassment was a distant memory. My body allowed itself to move and, dare I say it, I had fun! And, I’ve got a picture to prove it!

For more on healing the patterns of your past so you can lean into love, check out Nancy’s new book, The New Relationship Blueprint 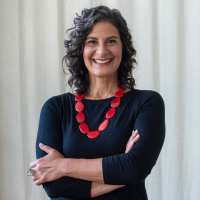 Previous Post: « 8 Steps to Open to Your Blind Spots and Navigate from Your Intuition
Next Post: Messages In The Making: Inspiring A Movement, One Badass Cross Stitch at a Time »