Understand that you are enough to think big, play big and manifest whatever you desire

Have you ever been asked a question that stopped you dead in your tracks? One of my mentors posed such a question the other day: “What do you allow others to believe about you that is not true?”

Fuck. That was a truth I did not want to see.

How could I, the fabulous woman that I am, defender of other women and true believer in every human beings’ greatness fall for the lame ploy of playing too small? How could I allow others to pick up the false belief that I had carried with me for so many years and allow them to reflect back to me my own worst fear — that I am not enough?

But there it was, in plain sight, and I couldn’t deny it.

I had to face the truth that for the past 18 months I had been fighting a mostly losing battle with myself around feeling like I am not enough.

If you had asked me two years ago about my self-worth I would have told you that I didn’t have any issues. At least I didn’t as long as I played a role in my own life in which I was less than whom I knew myself to be. Less than whom I dreamed of one day becoming. As long as I kept that version of myself under wraps where no one could see her, I was all good.

It really shouldn’t have come as any surprise to me though since I had taken a somewhat radical turn in my work in the previous year and the main focus was on helping other women learn how to become the version of the woman that they see in their dreams. The person their dreams require them to become in order to be capable of living the life they dream of living.

It seems pretty obvious that I, too, would then need to become someone new; and in many ways I had. I had learned how to earn more than $20,000 in a single day, instead of barely making that in a year. I had hired a team to support my business, got a visa and relocated to the States, and I had grown a community of 10,000+ women who all dreamed of one day being the woman they dreamed they could be.

Not that there’s not enough money, or love, or opportunities, or time or freedom, but to believe that I, myself, am enough.

I had failed to do one of the very things I warn my clients of — I had failed to force my expectations to keep pace with my dreams and desires as they grew. Instead, I allowed my expectations of myself to remain stuck in the past, where I had been before. And as a result, I projected that version of myself out into the world only to have it mirrored back to me by the people I surrounded myself with. The people whose opinion of me matters most, but whom I always feel I never quite measure up to their expectations of who they think I am, or what I am capable of.

As Kate Northrup said, “…truth seeps out eventually, even if you’re trying to ignore it.”

I am now in that very uncomfortable place of messy growth that most of us do whatever we can to avoid. While I personally count growth and expansion as two of my top core values in life, I, perhaps like you, resist the very things I desire. Why? Because growth can’t happen if we remain where we feel safe in our lives and within ourselves.

Growth happens by being willing to peer into the darkness that we hold within and to shine a light of recognition, of awareness, that ‘YES! I do want to change’.

We claim it and say to ourselves, I know that this is likely going to be bloody painful and I know I will be asked to give up being the person I once was, but I’m willing to do it anyway. Because what lies on the other side is far more valuable than staying right here where I am today.

It is not enough to say that I want to change. I must be willing to be transformed by my desire for more, to trust that I can have more, that I will have more. And that is the place where we get stopped. We stop choosing to believe that we can have more because we’re afraid to face the truth that we already have it all within us. And all this time, we told ourselves that we didn’t.

We told ourselves that we had to wait or that something or someone had to change first, only to wake up one day to realize that we had the power within us all along.

We were just too afraid to believe it, to go digging around in the depths of our subconscious to find the truth of all the ways we willingly gave up our power and chose to remain hidden from ourselves and from others.

We need to remember that there is always enough love to heal, air to breathe, joy to share, laughter to spread and kindness to soothe. When will we wake up and start believing in our own goodness, our own greatness, and share that part of ourselves with the world? When will we stop allowing ourselves to believe the false stories we see projected about who we are and what we’re capable of?

Don’t confuse my words with saying that this will solve all our problems, but if our thoughts really do create our reality, both as individuals and collectively, then we have an obligation to take responsibility for what we’re thinking and the feelings those thoughts give rise too. If we continue to believe that our power lies outside of ourselves — in the hands of a man, a corporation, a paycheck, a law, the approval of another human being or even our own country — we have no hope of ever fully realizing our greatest potential.

You know what you must do.

You have known all along what you are being called to do.

You are here to heal not only this wound within yourself, but also the wounds of the world, for they are all one.

Who will you choose to be today? Will you continue to allow others to see you as a person who is less than who you know yourself to be inwardly? Or will you softly, quietly, begin the revolution within that’s been pushing at the doors of your consciousness, calling you to rise up, to be seen, to be heard, to sing and to dance and to pray like the beauty that you are. The beauty that this world is so desperately in need of right now.

Who will you be today? 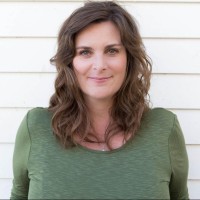 Siobhan McAuley is a teacher and host of The Meaning Maker podcast. She teaches women how to live a spiritually rich life through meaningful work in the new economic paradigm. Listen to the podcast @ soundcloud.com/siobhanmcauley