I was provoked and inspired to create a collective art statement — Under The Hijab Is… — as the result of my interaction with a young Syrian girl named Sara. I first met her in Hamburg, Germany on the Masterpiece tour of Project FUEL (an organization I founded in 2009). FUEL, which stands for Forward the Understanding of Every Life lesson, has a mission to bring experience to life through interactive means. When Sara shared a slice of her life, a life under the hijab, she planted the seeds for this artistic creation.

This past fall, having just completed another transformative event in the U.S. with World Merit, an organization comprised of global youth change-makers and visionaries, I sat on the flight home and read an article that grabbed my attention. It conveyed how many young people were being brainwashed into forming strong negative opinions about hijab-wearing girls and women. It was from contemplating this disturbing idea that the series was born.

I did not expect the project to grow so quickly and attract contributions from all around the world. I just wanted to do something and bring awareness to this issue. I initially tagged two very close artist friends of mine, Poornima Sukumar and Sadhna Prasad, that I knew would be equally passionate in making a difference and conveying a message through art. Their responses were powerful and left me feeling incredibly charged and hopeful — and relieved that there is a tribe of people who resonate with what I have to say.

The stereotypical image many people have of hijab-wearing women is that of a female wrapped in black cloth from head to toe. But there is so much more to it than that. I have had hijab-clad girls and women as my friends all my life and they are as cool and smart and adventurous as anyone I know.

I believe when the propaganda around us eclipses the public perceptions, when stereotypes strangle the power of peace, it is then that we must turn to art to rescue open-mindedness.

And that is because art and poetry, amongst other creative pursuits, can be largely credited for saving humanity amidst all the atrocities it has seen over the last few centuries.

In art abides grace. It has the tools to say the harshest things in a polite way, and yet create a mass impact. I turn to art (all kinds) every time I need to comfort my soul, to create calm in chaos. Each art piece in the series brings with it a unique perspective and striking impact. The artists infuse a refreshing medium of either illustration or painting to express their voice and vision.

The creations are as unique as the creators. I was particularly blown away by the work contributed by a UK-based artist, Josh Worrall. At first glance, his artwork looks like a graphic illustration; but upon further observation you suddenly realize the entire piece is created out of dots — specks of humanity coming together to form this painting, this statement. I was struck by the sheer passion he had to get this painting done — that he felt so impassioned to say something.

It is my greatest hope that this series, at its very core, is able to raise awareness about the beauty of hijab and the perspectives women who wear them have about it. This series aims to break the stereotyping of the hijab and ensure that young people don’t form strong negative opinions about people who wear the hijab. And of course, create inspiring art along way! Most importantly, I want the women who wear hijab to know that they should not give anyone the power to weigh their worth. As one of the artists, Poornima Sukumar says…

“May the stigma disappear like smoke in thin air!”

Since the series commenced, I have received heartwarming messages from the women who wear hijab about how much strength they derive from seeing beautiful images created in their likeness. I have also heard from husbands of these women from countries as distant as Iraq who have written me to show their support.

I feel some things need to be spoken about. Sometimes we need to take a stand in whatever way we can — and this is certainly one of those things. May this series crack open the space for inclusiveness by highlighting the beauty of diversity. May it inspire others to use their art, their paintbrushes, and their creativity to express their voices to break down stereotypes.

View the Gallery — tap any image to enlarge

You may also enjoy reading Recipes for Self Love: Caring for Your Inner (and Outer) Feminist by Alison Rachel 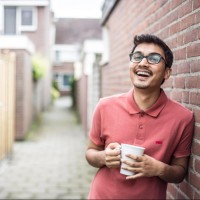 Deepak Ramola is the Founder & Artistic Director of Project FUEL. As one of the youngest life skills educators in the world, his mission is to document human wisdom. He also writes poetry and lyrics for hindi films.

Previous Post: « The Making of a Healthy Deviant: Choosing a Healthy Life in an Unhealthy World
Next Post: Adrenal Fatigue: Diagnosing the Burnout Epidemic »