A life-changing book points one woman back to herself

Sometimes, when you least expect it, a book can completely change your life.

In college I’d had a part-time job in a small independent bookstore. It was the best job I’d ever had, and I enjoyed it so much I decided to take a year off before going to law school. Instead, I wanted to try my hand at the New York City book publishing business, with the thought that I’d learn the tricks of the business and publish a book of my own one day.

One year had turned into four, and I never ended up applying to law school. Instead, I’d worked my way into the editorial department at Penguin USA. I had finally been promoted to associate editor, which meant I was acquiring books of my own and was no longer answering someone else’s phone. I also had an office (with a door!), great co-workers and a salary abundant enough I could almost afford an apartment without roommates.

In other words, I had everything I’d been telling myself I needed in order to be happy. And yet, I was not at all happy.

One particularly bad afternoon, a co-worker walked into my office. She took one look at me — head on my desk — and made a proclamation.

“I think you should read this book my mom keeps telling me about,” she said. “It’s called The Power of Now.”

Even through my depressive haze, the title rang a bell. I lifted my head and scanned the bookshelf next to my desk. Voilà, Eckhart Tolle’s book was sitting right there.

Turns out the publisher had sent me a copy of the book months before, when I’d reached out about another project. Assessing that it was too ‘woo-woo’ for my tastes, I’d put it on the shelf and forgotten about it.

But I had reached a point of desperation. My friend’s mom seemed to think this would help, and that was good enough for me. I took the book home with me for the weekend.

And proceeded to not put it down all weekend long.

I read it on the subway.

I read it over dinner.

The more I read, the lighter and — could it be true? — the happier I felt.

Monday morning, I walked back into my friend’s office and said, “Reading that book felt like a spa for my soul. I wish Eckhart Tolle would start a religion.”

Since I could talk about nothing but that book, it didn’t take long for a different friend of mine to check it out.

“That book is just Buddhism,” she told me after reading the first couple chapters. She seemed disappointed, but I was elated.

Buddhism! I thought. That’s a religion!

A few weeks later I was sitting on a cushion at a Buddhist meditation center in Chelsea. And there, as I took course after course, something remarkable happened. I started to recognize the feeling I’d felt when I first read The Power of Now. It wasn’t quite lightness, though it was light. It wasn’t exactly happiness, though I certainly felt more joyful.

The feeling, as it turned out, was peace.

I began to follow that feeling everywhere. It became the most important feeling in my whole life. Chasing it took me on a journey over the course of the next few months and years. First, it drew me to leave Penguin for a new job at Hyperion Books. Then it led me to start playing the guitar again, and making art. Peace was the feeling that kept me returning to the meditation cushion, even when it was excruciating. At first a few times a week, and then every single day.

Finally, it was what called me to leave New York altogether, and take a job working at a small spirituality publisher in Colorado.

Looking back at the woman I was before reading Eckhart’s book, I see someone who did not know herself deeply. She’d pushed aside what truly lit her up — creativity, authenticity, the spiritual mysteries — in exchange for what she thought she was supposed to care about, like job titles and celebrity sightings and hot new restaurants.

Since that time, I’ve curated my life very carefully so there is more and more peace; less and less stress, tension, and anxiety. And I can honestly say that the domino effect of goodness all started with The Power of Now.

My own book, The Book You Were Born to Write, is being published this month. It’s a book that walks aspiring transformational authors step-by-step through the process of getting their wisdom onto the page and into the world.

Naturally I am excited about the book for lots of different reasons. But there’s one reason that pulses with more life than the others.

I’m excited to have written this book, because I want more books like The Power of Now in the world.

Perhaps I would have found my way out of NYC without Eckhart. But it might have taken a lot longer, and might have been a lot more painful. The cliché is true: Books open up new worlds. They can be powerful catalysts for change and growth, and for healing the divisions inside ourselves — which is required in order to heal the division in the world around us.

If you are in pain, try picking up a book.

If you see someone else in pain, try recommending a book that helped you. (Or, as in the case of my coworker, a book your mom keeps telling you to read. Moms are usually right.)

And most importantly, if you have a transformative book in you — one that wants to come out into the world — consider committing the time and energy and resources into actually writing it. You never know who might be out there waiting to tell a story like mine about the book you were born to write.

You may also enjoy reading Living What Matters: Reflections, Prose and 52 Prompts for Self-Inquiry by Mark Nepo 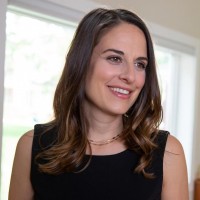 Kelly Notaras is a writer and book editor. In 2013 she founded kn literary arts, an editorial studio helping authors write, edit and market their books. In 2018 she published her first book, The Book You Were Born to Write: Everything You Need to (Finally) Get Your Wisdom Onto the Page and Into the World. She lives in Colorado. Learn more at knliterary.com and Facebook

Previous Post: « Clean2Antarctica: Exploring the circular economy from waste to resource
Next Post: The Awakening of Sleeping Beauty: Tragedy, Humanity… and Lipstick »