A quest for meaning in modern day relationships inspires one woman to send hand-written letters to 500 “friends”, leading to unexpected discoveries

How many people can you actively be in real relationship with?

While that seems like a simple, straight-forward question the reality is more complex. First, how do you define the realin real relationships? Are there certain criteria we need to meet? Is there a checklist? Do we need to show up at certain events or make a minimum number of phone calls or texts? Maybe it’s checking in at least once a week?

Furthermore, if you are indeed in it, does it have to maintain a certain level of activity for a preestablished unit of time for it to remain the realdeal?

But wait — aren’t there seasons for relationships? Don’t they come and go, and evolve like we do? So, are they still considered real from a historical perspective even if they aren’t actively real?

For all we can’t enumerate in human interaction, what we do know, and what we can quantify, is that we can’tbe in real relationship with hundreds of people.

And that’s true even though many of us are connected to that number of individuals on social media.

It’s also one of the biggest takeaways that I learned via my quest to write all 500-plus of my Facebook friends a handwritten letter.

It seemed like a good idea: reconnecting with everyone in a personal way. It was, I supposed, a noble — yet completely ridiculous — attempt to transform my on-line connections to actual one-on-one, flesh-and-bone, relationships.

At first, the prospect of writing the letters didn’t seem that daunting. I suppose that is because I never really felt like I’d finish.

I wasn’t seriously going to write ALL my friends — right?

Then, once I got beyond the first one hundred letters, I realized that the endeavor was full of so much life-changing goodness that stopping wasn’t really an option. Beyond that, my friends who hadn’t yet received a letter were beginning to become aware of what I was doing. They were expecting their letter. I couldn’t let them down, could I?

I was seriously going to write ALL my friends.

Though there was so much pure love associated with the project, it turned out to be more personally taxing than I could have ever imagined. Physically, I developed a huge callous on the finger were my pen rested. By the end, it was a bloody, ink blotted mess. Emotionally speaking, I experienced waves of “too much” as I shared my story, repeatedly, and then digested the sharing of individuals who I cared about.

For every time I thought, “this is the best thing I’ve ever done” there was an instance of “Oh my God, I absolutely cannot write another letter.”

At the end I was depleted, elated, and relieved. What did I learn?

Predictably, my journey through the U.S. mail resulted in joy, laughter, and a sense of awe that I was connected to so many amazing people who had come into my life at the perfect moment.

My grateful meter went totally off the charts!

It also taught me, letter by letter, that behind every profile, post, and picture are real, imperfect people living real, imperfect lives. And in the same way that others can’t understand the depth of our situation, we can’t ever comprehend the realness of other people’s lives.

I also learned about the freedom associated with non-instantaneous communication. Dropping letters into mailboxes released me from expecting an immediate response. I had no idea when, or if, my words would be read. In this alternate universe of communication, I also had time to let friends’ replies marinate before responding. The impact was profound.

I said so many things to so many friends that otherwise would have gone unsaid. I came to realize that boldly reaching out to someone and expressing ourselves is always a good thing.

Then there was the sense of unity I felt toward every single one of my Facebook friends. Because once two people connect in a one-on-one way with goodwill, who cares who believes what?

As it turned out, the process of writing the letters, all of them, became the biggest growth opportunity of my entire life. For the reasonable sum of $600 (what I spent on postage and stationery) I was transformed into a version of myself that I never would have even dreamt up.

On the flip side, what I didn’t expect was the guilt I felt. The truth was that for every ounce of goodness the repeated, endless cycle of writing letters and receiving responses elicited, there was an equal dose of contrition.

While yes, I was reaching out to these friends in love, when they replied in kind, often divulging personal information about their very real struggles and pain — I realized that I could never keep up with the volume of sharing.

These people needed a real-life friend, just like I did, but there was no way, none, that I could be there on a day-by-day basis for hundreds of actual human beings.

My feelings towards them – my love, gratitude, and sincere concern – were a concrete reality, they just weren’t sustainable.

It left me feeling like I had failed them terribly.

While I don’t know if I’ll ever completely escape the guilt I still feel when thinking about certain letter exchanges with certain friends, I did have a life-changing realization because of the profound experience.

Though we can’t be there for the hundreds of people we are connected to via social media, we can be diligent about being present for the people in each of our small circles of friends.

We can call and check in. We can show up when it matters. We can be present in a deliberate, one-on-one way which leaves no doubt of the other individuals’ value.

It’s paramount that we separate our online relationships from those we do in “real life.” Yes, we may feel connected to and care about our social people, but it’s absolutely critical that we cultivate our in-person relationships, not only for our own wellbeing, but for the wellbeing of others.

And if the circles of intimates linked to each of our precious online friends do the same, also drawing an invisible line between “real” and “virtual,” then those hundreds of human beings that we genuinely care about, but can’t possibly attend to, will be looked after in a way that’s life changing.

The result on both sides of the equation is having the capacity to care and therefore be cared for. To support and be supported. To love and be loved. Not only is that something — it’s everything. The me that set out to write the letters is a completely different person than the me now. My great hope is that the people I do life with can see and feel the difference.

You may also enjoy reading Letters to My Mindful Self: Practicing Mindfulness Through Letter Writing, by Wendy Wolff. 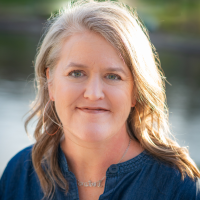 Amy Weinland Daughters is a freelance sportswriter and author. Her second book Dear Dana: That Time I Went Crazy and Wrote All 580 of my Facebook Friends a Handwritten Letter (She Writes Press) is due to be released May 17, 2022. Currently a resident of Tomball, Texas (a suburb of Houston), Amy and her family have also lived in Blackwell, England and Dayton, Ohio. Learn more at amydaughters.com

Previous Post: «  It’s Been Pouring: The Dark Secret of the First Year of Motherhood
Next Post: Garden Therapy: A Story of Triumph  »