I know… You want to say something kind, something inspiring, but sometimes it’s better just to listen

The question is not how to get cured, but how to live.

According to the Centers for Disease Control and Prevention, 6 out of 10 adults in the United States have a chronic illness. Chronic diseases are ongoing, generally incurable illnesses or conditions, such as heart disease, asthma, cancer, diabetes, and many more. Science tells us that these diseases are often preventable, and frequently manageable through early detection, improved diet, exercise, and treatment therapy. That said…

Unless you live or have lived with a chronic illness, you don’t know how debilitating it can feel.

It takes up space and makes everything more difficult. On some days, you can hike ten miles; on other days, you don’t have the energy to make yourself a cup of tea. Because it’s invisible and people can’t see it (some choose not to see it), they assume how you feel. Some even start to suggest that you might be making it up and will offer unsolicited and unhelpful advice. Sometimes they pretend that the illness doesn’t exist, and they want you to go along with it.

The challenge for me comes from the illness being invisible. I appear to be physically okay, but might be dealing with excruciating amounts of pain or low energy. I have had people say to me, “You look good. Why can’t you party until late?” When someone said, “You do so much yoga, how could you fall sick?” I wanted to turn around and say, “I didn’t choose to be sick. It wasn’t my choice.” But I have learned that my sanity and energy are not worth engaging in such insipid conversations.

Part of my self-care regime is no phone calls in the evening unless it’s an emergency. I am at my job during the day and then work with clients, which leads to a heightened state of both energy and stress for extended periods of time. After my workouts and cooking dinner, I create space for myself. In the evenings, once we are done with dinner, I like to give my mind-body time to rest and recover, which means intentionally disconnecting. My condition flares up from stress, so I avoid any triggers. Prevention is better than any cure.

I often get asked, “You are still not speaking on the phone late in the evening?” like I’m starving a five-year old.

It’s infuriating when someone finds that my self-care seems radical and selfish when I don’t impose my choices on them.

If you haven’t had to fight for your life in the emergency room of a hospital (Thank God!), you will never understand my stance. As Joseph Conrad once said, “The question is not how to get cured, but how to live.”

Business owner, Anne McAuley Lopez, has chronic myeloid leukemia. She was diagnosed in July 2016, just four months after getting married.

Here is what she’d like people to stop saying:

Pragati Adhikari, an associate editor of a Hindi women’s blog and a therapeutic artist and counselor who uses art for self-healing, has polycystic kidney disease. This disease took away much from her life. Apart from the physical, mental, and emotional stress, it gave Pragati a lot of anxiety and uncertainty. “But it’s easier for you because you are used to sickness, surgeries & procedures,” some said to her. She observed, “Things would come up when we are having discussions, like me wanting to rest (I don’t have a fever so why would I be resting, right?), or when I say that now I feel more anxious on my visit to the hospital or just before a blood test or IVs (there is no long enough interval to forget the pain from the needle piercing you). The attitude is literally like, I am used to living life with a sickness, so I should not complain about being tired or pushing myself all the time, because everyone is doing so much, everyone gets tired — so what is so special about me? Why should I be getting any special treatment? Because my parameters are normal, It’s all in my mind now.”

Mita Mistry, a columnist mindfulness-based cognitive therapist and acupuncturist, has Celiac disease (an autoimmune condition). It is a chronic intestinal condition. Her advice…“Avoid dismissing or minimizing someone’s symptoms whether they are physical or mental health related. Comments like ‘it could be worse’ are really unhelpful and turn it into a competition for who feels the worst.”

“Pain is pain; listen without judgment.”

Ritu Saheb, Founder/Principal Architect at Saheb Architecture, also has Celiac disease, arthritis and adrenal fatigue. “My illness is very manageable, and I have made huge strides. The most debilitating thing about it was exhaustion. People don’t recognize that exhaustion is a real thing, and that a night’s rest won’t fix it. Or that food could flare up a chronic condition (as in my case). Especially because I am super energetic and a high-achiever.” Saheb has had servers in food service say to her, “Our food uses low-gluten wheat or our bread is non-GMO or gluten gets burnt off in our high temperature pizza baking or people who are gluten-free haven’t had problems with our clam chowder.” They simply don’t know that if you have Celiac disease, gluten is literally poison in your body.

Living in Toronto and working as an account manager for an insurance brokerage, Nicola Blackwood, has a condition called MdDS which stands for Mal de Debarquement Syndrome. “It feels like you’re constantly in motion even though physically you’re not. The only sort of feeling of normalcy comes when you are actually mobile, as in traveling in a vehicle or train. Along with this illness comes severe anxiety, says Nicola. Looking at her, you wouldn’t be able to tell. “But I take meds for anxiety just to keep a normal heart rate. People tell me it’s all in your head or I’m a hypochondriac. Yup… but I let it slide. I’m tired of explaining.”

I am not accusing everyone who says something insensitive to someone living with a chronic illness as being mean or intentionally cruel. But I have observed that many people walk into a room with assumptions and preconceived notions about another’s situation.

Instead of assuming how a friend or a family living with chronic illness is feeling, just ask without being presumptuous. And know that on some days, silence may be the best support.

As Jennifer Starzec once said, “I often wished that more people understood the invisible side of things. Even the people who seemed to understand, didn’t really.”

You may also enjoy reading Healing vs. Cured | Living With Illness by Sharon Coyle-Saeed 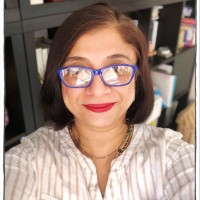 Sweta Srivastava Vikram is an international speaker, best-selling author of 12 books, and Ayurveda and mindset coach who is committed to helping people thrive on their own terms. Interviewed by NBC Palm Springs, she was voted as “One of the Most Influential Asians of Our Times” and won the prestigious VOTY Award. Learn more at swetavikram.com

Previous Post: « Want to Create Change in the World? Here’s Where to Start
Next Post: What I’ve Learned About Being a Mom in 2020 »