Gina Raphaela grew up in a family of secrets and suppressed self-expression, and set herself free via her mission driven art to end gun violence

Born Italian American, raised in New York, the middle child of six, with a father who was a member of the Genovese Crime Family — I learned at an early age how to keep secrets and put a clamp on self-expression. It was safer that way.

Despite this childhood environment, I was determined to find a way to express myself creatively. And by the time I was seventeen, I began to explore the art world in New York City where I now live and work.

Influenced by my bold and vibrant Sicilian heritage, my art juxtaposes a masculine sense of danger and provocation with refined finishes.

My creative process begins with an open heart and quiet mind as I attempt to create from an acceptance of the unknown — the ultimate freedom. My intent is that the viewer experiences that same freedom.

Three years ago, I started to make wearable art in the form of socially conscious jewelry with co-founder, actress and author of Hiding Out, Tina Alexis Allen. Thus began, Gina Raphaela Jewelry and our ‘No More Violence’ collection. After attending a speech by the Dalai Lama where he pronounced that “the world will be saved by Western women,” we heard that as a call to action.

I liked the challenge of transforming a symbol of violence into something beautiful, something wearable. I had been working with inert bullets, in some of my more political constructive sculptures. Tina and I decided to make refurbished bullets the center of our socially responsible collection as a way of taking a stand for non-violence.

Our handcrafted designs transform bullets while sending a clear message of peace, safety and equality.

Each season, a generous portion of Gina Raphaela Jewelry’s proceeds benefit a different non-profit organization whose mission is to end violence.

What makes my work even more satisfying is that as a painter and sculptor, I have always wanted to make my art accessible to a wider audience, allowing more people to own the story of my art. I understand that buying a piece of jewelry is a very different investment than owning one of my six-foot sculptures. There is a different form of intimacy and connection.

The statement pieces are always conversation starters and usually result in dialogue about the mission of the brand. We have never been anti-gun, but we are absolutely about common sense, gun sense, and personal safety. We became sick and tired of the senseless violence and this is our way to bring more attention to the need for change.

View the Gallery: Tap any thumbnail to enlarge

You may also enjoy reading Art Is Our Teacher: Let’s Learn From Rather than Destroy the Art which Reflects Our Past by Kristen Heimerl 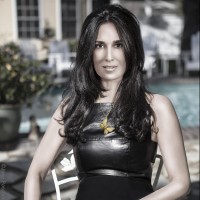 Gina Raphaela, designer, artist and activist, is the co-founder of Gina Raphaela Jewelry, a socially conscious brand. Gina and actress, author Tina Alexis Allen created the No More Violence collection to bring awareness to the issue of gun violence.