From the abyss of depression and suicidal yearnings, one woman sets off on an adventure of living in her van — in search of herself, healing and authentic wellbeing

Four years ago I planned to kill myself.

I settled into the driver’s seat of my 2010 Toyota Sienna, wiggled a bit to get comfortable, and clutched the steering wheel to remain steady. It took more courage than I’d anticipated to start the engine. I glanced over my shoulder at my studio cottage behind me. I had such deep affection for my tiny home. Choking on the burning lump in my throat, I turned the key in the ignition. My foot slowly depressed the gas pedal. I’d chosen the vernal equinox for this genesis. Surrounded by sunny yellow forsythia and vibrant purple crocuses heralding spring. I believed I would soar.

What’s the worst that can happen?

Every decision I face is evaluated by that one simple question.

I’d been divorced for several years, my son was in college, work was work, and I was battling an unrelenting restlessness. It had become physical. I could feel it in the pit of my stomach as the uncanny sensation of butterflies. In my struggle to identify and satiate this affliction I spent hours lost in internet rabbit holes searching for what I thought I needed.

When I finally found the cure it was more than shocking.

It was van life.

A nomadic lifestyle in which one lives, works, plays, and travels in a van. Like a hippie. Or a bar band. I had no idea this subculture existed, and that it was a growing trend! But once discovered, I knew I wanted in. Badly.

Upon further research I developed growing concerns. What would people think? Is this a mid-life crisis?

What if I failed?

I countered each mental roadblock with the query, “What’s the worst that can happen?”

This one question allowed me to determine if a perceived worst-case scenario was emotional or practical. I learned that my emotional issues were fear-based. By isolating each fear and breaking them down, they lost their power.

The analysis helped recalibrate my perception of success, sell my belongings, and downsize to a one-room cottage in anticipation of embarking on nomad life. It was happening. I was on my way!

Then my mother died.

My mother had succumbed to Alzheimer’s disease. At its onset, I moved across the country with my son to be near her and my father, and I had been her caretaker for a time. The disease defeated us. We moved her into a memory care facility and watched as she faded away to a place we couldn’t follow. My guilt over failing her was implacable.

Shame imprisoned me in a sinister abyss of depression.

Paralyzed by the weight of my failure I withdrew from life outside my tiny home. My job performance plummeted. There was no respite, but for sleep. I yearned to sleep forever. I begged for Death. When it didn’t come I plotted ways to meet it.

For a moment, I rested my head on the steering wheel of the minivan. It was time. I sat up straight, breathed deeply, and took inventory once more.

The one question endured even when contemplating my suicide, “What’s the worst that can happen?”

The conclusion was undeniable, “It would destroy my son.”

Killing myself seemed the cruelest act I could perpetrate against the person I love most. Although he’s a grown man, I still do my best as a beacon he can look to at every stage of life. Even as a guide for what not to do.

Suicide conflicted with my parenting philosophy.

While I was too sick to research or reach out for help, I had no problem binging Netflix, overeating, drinking way too much red wine, and generally avoiding any physical activity or social interaction.

That’s still pretty much my ideal weekend. Without the wanting to die part.

Depression is a lifelong challenge I hid for years. That major depressive episode profoundly affected my perspective.

I finally granted myself permission to fully embrace my depression, and learned to live with it. Leaning into its desolation helped me discover how to remedy my despair.

It took some time for my ailing psyche to get there, but when it did it was a genuine epiphany: I should at once eliminate everything that did not benefit my mental wellness.

Months passed before I began to feel anything approximating wellness. Nowhere did I feel better than on the road. I experimented with car dwelling. Venturing further for longer periods. My first solo cross-country adventure over three months was electrifyingly life-altering. The thrill of exploring new places was as exhilarating as I’d dreamed. But traveling alone astonished me in a most unexpected way.

It cloaked me in anonymity. Feeling unseen granted me a freedom I’d never felt before. It released me from the burden of others’ expectations. There was only me.

I could go anywhere and do anything. It had me feeling as close to comfortable in my own skin as I’d ever been. I was seeing myself from the inside out. I was smitten with the power of my liberation. Living as a nomad would be a decision I knew I wouldn’t regret.

There were logistics to consider before I actually hit the road full-time. Indecision that caused sleepless nights. Unanticipated problems to solve. Always gauging perceived risks with, “What’s the worst that can happen?”

As my foot pressed the gas pedal of the minivan, my own restlessness matched the vibrating impatience of the impending spring. I had been propelled to this very moment. Not by fate. By my own orchestration.

I eased out of the driveway of my tiny house for the last time. Alive. Captain of my own life for the first time.

This lifestyle isn’t glamorous or easy. The principal hardship is finding safe haven night after night. There’s disequilibrium in the exceeding amount of exposure to vulnerability. Underlying even the most ordinary task is the perpetual low hum of my apprehension.

I don’t travel in search of comfort. The adventure is in welcoming discomfort. In discovery. In navigating the unknown. Every challenge met is a victory of my ingenuity and spiritual endurance. I am empowered. And it is intoxicating.

In the past nine months I’ve rolled over twenty-thousand miles undaunted. Northeast from my former home in North Carolina, across the vast wilderness of Canada from Nova Scotia to British Columbia; now south down the rugged Pacific Coast Highway.

I’ve hiked lake shores crowded with 3-billion-year-old rock, photographed the deserted Golden Gate Bridge as San Francisco slumbered, dizzied at the depth of a billion stars in the blackest sky, and worshipped the sunrise from a mountaintop on my birthday.

Friends tell me I’m fearless. That’s not true. I live with my fears and let my depression walk alongside me. That is who I am. Nowhere am I more my badass self than on the road. In a minivan.

What’s the worst that can happen?

You may also enjoy reading Togetherness Redefined: A Family’s Story of Life on the Road, by Celeste Orr. 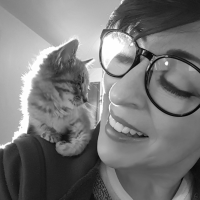 Carol Fisher is an independent writer and road warrior whose chosen home is a minivan. When she's not writing for hire, she's exploring the United States, camera in hand, because photography and road trips are everything. Her chief navigator is Samus, her little blind rescue cat. Learn more at thesearebetterdays.com