This past season I set the intention to try new things — a way to face my fears, open my mind and maybe take some risks.

When you have children, you often find yourself bringing new foods to the table with a smile that says, “Just try it.” Unfortunately, the only way to expand the palate is to introduce new textures and flavors a couple of times. One time does not a habit make, so even though it may have been spit out the first and second tries, the third time is usually the charm.

But it is not just foods that we introduce little by little. We spend a lot of time exploring activities too, like baseball, soccer, dance, archery, and even swimming. Fortunately, a child’s mind is very malleable and open to most new experiences. Think about the time your child jumped from the monkey bars trying to fly, they embrace the rush of adventure even if they lack the common sense of safety.

About 50 years later, my children have grown and settled into their own likes and dislikes. They occasionally reach beyond their comfort zones to try something new and then relish their ability to be creative. I, on the other hand, often feel fear at the prospect of doing something new.

I consider myself more adventurous than most, but fear of failure or getting injured definitely gets in the way.

So this past summer, I set the intention to try new things. I decided that I was going to face some of my fears, open my mind and take risks. This manifested itself one day recently when I woke up and deemed it a “Me” day.

I had recently purchased a stand-up paddleboard (SUP) after only two previous attempts at using one. My first time was probably three years ago, and it was challenging to say the least. The water was choppy, the board unstable, and I spent the next three days struggling to stand or squat from the sore muscles. The next time, I almost went out with a friend, but the wind was a little tricky, and secretly I was relieved for the excuse. But that did not stop me from convincing my husband that I wanted a SUP.

I guess my persuasion skills were spot-on because we purchased my very own pink and green board the following weekend. Of course, the fact that I bought it for the colors speaks to my knowledge of the sport. But still, with the board rolling behind me to the bay, I was ready to give it a third try. If broccoli and Brussels can stick around after try three, the board had a pretty good chance.

Off I went, paddling over smooth, glassy water. It was fantastic. I was mesmorised by the sound of the paddle dipping into the water and the board cutting through. It was the most Zen experience I ever had. I felt one with the water and entirely at peace. That was until I lost my focus, forgot I was standing on the water, and landed in the bay with a splash.

I laughed at myself as I climbed back up and continued onwards. Im pretty damn proud of myself for not giving up.

Then, I moved to my next adventure, a Thai Massage. Without knowing what I was getting myself into, I laid down on the floor mats, and my masseuse, Jane, led me through a combination of gentle yoga stretches while she opened my joints. ‘This helps to increase the flow of energy’ she told me. My hour went by in a minute, and as I finished, I swore I would never get a “regular” massage again. My time with Jane was transformative, and I floated out of the studio finally understanding when people have told me their love of massage work.

But wait, it was only 2 pm, and I still had a little more me-time. On my way from my massage room, I passed the yoga studio and noticed these beautiful silk hammock-like things hanging from the ceiling. The sign said, ‘Aerial Yoga’ Ok — I was in. I had always wanted to float gracefully through the air like a cirque du sole performer. Here was my chance.

Unfortunately, my chance had to wait a few days, but that would give me time to get excited and stay resolute. On the day of my class, I arrived early to get a peek at the studio again. Boy, was I surprised when the receptionist told me I was the only one signed up. My plan was to hang out in the back and blend in with the others… so much for that. It was going to be a solo class. My instructor, Marissa, came and set up our ‘hammocks’. I told her I was nervous as this was entirely out of my comfort zone. I do yoga, yes, but always with my hands and feet firmly planted on the ground.

We started slowly just sitting in the scarf, and I thought, this isn’t so bad. Then, she started asking me if I wanted to backbend. I wanted to say, “I’m not comfortable going backward —ever,” but when I opened my mouth, a resounding, “Sure” came out. We hung upside down; we swung like superman, then she asked, “Are you ready to flip?”

Again, the panic rose in my throat, and I wanted to say, “Maybe next time,” but when I opened my mouth, “Sure” came out again.

I then said, “Instead of asking, I guess I am in for whatever you suggest.”

I flipped twice and loved it. I felt like the girl in a cabaret bar that wraps beautiful material around her legs as she hangs from the ceiling. When the class was over, Marissa remarked that most people don’t do even half of what I did in the first class. I told her about my ‘me day’ and she applauded.

It’s easy to get stuck. It happens to all of us. The key is to give yourself permission to get out of that prescribed, comfortable box and explore something new. It doesn’t have to be as dramatic as my ‘me’ day, but it might energize you. If you fall or fail, laugh it off and reward yourself anyways, you’re still growing. 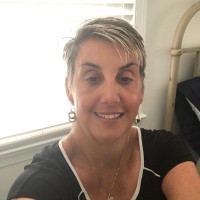