How I left my pain in the past, unblocked negative energies and regained creative control of my life following a 3-part forgiveness process.

I closed the door, backed out of the driveway and drove away. The house grew smaller and smaller in my rearview mirror as I repeated my prayer of forgiveness. I was ready to let him, and this part of my life go — I knew I had to. I drove around the corner and lost sight of the house and never went back… until eighteen months later, only days after his passing, when I returned to see a giant blue metal storage pod plonked on the driveway being filled with his belongings. He didn’t need them anymore.

I nervously walked into the house, knowing he wouldn’t be there but wanting nothing more than to see his face again and embrace him. Walking into his bedroom was like walking into my past. I knew the empty hope-filled dream of our relationship I had held onto for so long could never be fulfilled. That’s when every moment we shared together flashed through my mind like a film — every scream, every angry word, every kiss, every love scene, and every whisper of, “I love you, hunny,” danced through the air. Then they were gone; only the fragments of his life remained scattered across his bedroom floor.

I had come to help his family clean out his house. In doing so I hoped I could heal my own grief. I don’t think I would have been able to deal with his death had I not truly and deeply forgiven him and myself for the path our relationship had taken, including the ending of it. This knowledge gave my mind a fragment of peace to hold onto in the midst of my agony.

Forgiveness does not mean you excuse a person’s behavior or even your own behavior, rather that you choose to release it and no longer allow it or the perpetrator to have power over you.

It’s a means of freeing yourself from that which seems unfreeable. It’s a way of allowing yourself to continue living the life you deeply desire despite the things that have happened or been said to you and when others have seemingly wronged you. It’s a way of using these experiences to create new meanings and empower yourself and your life.

Blame and resentment towards another person holds you in a place of disallowing your own natural flow of wellbeing. It thwarts your progress and movement forward in life while doing absolutely nothing to the person to whom you are holding the grudge towards. This bitterness and resentment gets trapped in our emotional self as well as our physical cells, creating disease in our bodies and debilitating our minds.

It’s nearly impossible to forgive anyone — including yourself — with the conditioned mentality of labeling yourself and others as having done something wrong.

This right/wrong belief system has been ingrained and reiterated to us from childhood into our adult lives. It goes something like this:

This black and white thinking is also etched into the way we think about religion and politics. It has probably caused you many grievances up until now and will most certainly continue to do so until you choose to reframe and examine other people’s actions, including your own, in a different way. This worldview then becomes empowering rather than disempowering. When someone does something that hurts us, or when we do something that we feel guilt and remorse over, it’s always an attempt to have a need met. Always. Knowing and understanding this is the foundation of forgiveness and emotionally setting yourself free from heavy inner energies.

Here are questions to ask yourself or journal on for deeper clarity and insight into yourself and how to forgive:

There are three major aspects to forgiveness that are absolutely vital to our wellbeing. They give us the ability to move forward in our lives with a sense of freedom and bliss. When you venture down any of these three avenues of forgiveness they will produce uplifting benefits for you and propel you along the path of your own healing, but when combined together with equal focus and intention, that’s when you truly are ready to liberate pent up emotional energy and set yourself free.

To move through the 3-part process of forgiveness, here are some guided forgiveness exercises:

Write a letter of truth. Think of the person or people you feel the most negative emotion toward. The person who makes you feel the angriest, the most resentful, sad or any other intense emotions that comes up when you think of them. That’s the person you want to focus on forgiving.

Write “Dear [FILL IN THEIR NAME]” at the top of a piece of paper, then write a letter that spills out everything you want to say to them. Don’t worry, you’re not going to send them the letter. Give the hurt inside of you a voice. Get HONEST. Tell them everything they’ve done that has hurt you. Let it all out! Feel your feelings with the intention of RELEASING them. This is extremely important.

Next write a letter of forgiveness. Take a clean, fresh piece of paper and write that same person’s name at the top then continue to write, “I forgive you for…” Write down all the things they’ve done that have hurt you that you now forgive them for.

As you write down what you are forgiving them for, envision a crusty layer built up around you flaking off and being blown away into the wind where it disintegrates as you let these past hurts and emotions be washed away from you.

Continue the previous steps above for both the letter of truth and the letter of forgiveness, but this time focus on forgiving your life circumstances.

When you’ve finished writing the letters, burn them (IN A SAFE PLACE). This releases the energy and emotion in them. Releasing these blockages that are held because of resentment of past hurt frees energy that, when released, can be flowed towards creativity and into expanding into a more expressed version of yourself.

To take this exercise and your own expansion further, you can journal out and create empowered meanings from the events of your past that have felt disempowering up until now. For example, from my own personal story at the beginning of this article about my emotionally turbulent relationship, I created empowered meanings from our relationship, including the ending of it and his death. I did this by choosing to look at the deep learning I took away, the clarity I gained on who I am at a soul level, the life I want to live, and how I want to be of service to other people. It’s largely why I do the work I do now and was a huge catalyst for why I’m living the life I am right now.

When I view what was once a painful experience in this new and empowering way, I can use it for good.

The truth is that we cannot control what’s happened in our past, but we can change the past by giving it a new meaning and creating a new emotional experience around a once painful one. By forgiving your past, you free yourself to create a new future.

You may also enjoy reading Speaking Up: Tools and Practices for Claiming Your True Self & Happiness by Melanie Roxas 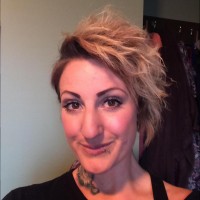 Previous Post: « I Practiced Self Compassion for a Year — This is What Happened
Next Post: Clean Heart, Clean Start: Refreshing Your Emotional Garden »