Photographer Gabriela Herman, a child of a gay mother, turns her lens on other children of gay parents, revealing shared and poignant challenges

My mom is gay. But it took me a long time to say those words out loud.

She came out over 20 years ago when I was in high school. My parents soon separated and, eventually, she married her longtime partner in one of Massachusetts’s first legal unions. It was a raw and difficult time. I hardly spoke to her for a year while I studied abroad. It felt like a fact that needed to be hidden, especially among my prep school classmates. The topic was taboo even within our otherwise tight-knit family. My younger siblings were dealing with the same emotions, but meaningful conversation seemed beyond our reach.

Seven years ago, at the age of 29, I began The Kids project, with the intent to meet, photograph and interview people with a similar story. Despite living in numerous cities around the world, I had never encountered anyone else raised by a gay parent.

My sister directed me to COLAGE, an organization that supports people with LGBTQ parents. I met Danielle Silber, who has six parents and who had become an organizer for the group. She invited me to her East Village apartment where her living room floor was filled with young people each telling their own family’s ‘coming out’ story. Since that night, I’ve documented nearly 100 stories of children and met many more. Each portrait and interview has become, in an unexpected way, my own therapy session.

The Williams Institute estimates there are at least six million children with gay parents in the United States. And in my interviews, I discovered every situation was unique. These conversations recalled having to juggle silence and isolation and needing to defend our families on the playground, at church and during holiday gatherings. Some were adopted, some conceived by artificial insemination. Many are children of divorce. We were raised in urban areas, the rural Midwest and nearly anywhere you can point to on the globe.

Some aspect of each story resonated with my experience and peeled away at my own sense of solitude. Our stories need to be told. While my experience was difficult, that needn’t be the case for the next generation. Hopefully, this inequality will fade into the history books and my future children will wonder what all the fuss was about.

Tap any image to view the Gallery:

>See the full portfolio at TheKids.GabrielaHerman.com 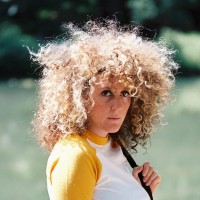 Gabriela Herman is a photographer who specializes in portrait, travel and lifestyle work around the globe. She holds a dual American and Brazilian citizenship and when not on the road is based in Brooklyn, NY. Learn more at gabrielaherman.com.

Previous Post: « Meditation 2.0: A New Connection to Brain Stimulation and Self Awareness
Next Post: Health In a Jar: Growing Your Own Probiotics »