In a story of the past repeating itself, a survivor of the 2009 swine flu pandemic in Mexico recalls events eerily similar to today’s coronavirus crisis

What happens when a flu epidemic hits a city of 20 million people, and authorities fear a pandemic?

It is Sunday, April 29, 2009. Before I take my second step off the bus in Mexico City inbound from Acapulco, a waiting police officer hands me a face mask. Before I can decide whether to put it on (since only 20% of the people are wearing them), I accidentally drop it on the floor of a nearby subway station. Should I strap it on my face now? I must pick my poison. I decide to stick the mask in my pocket and stay five feet away from everyone else. When I planned my trip, I hadn’t foreseen getting crowded together with my share of the 20 million inhabitants.

That evening, 12 of 20 passengers in my subway car wear one style or another of the surgical-type mask. I can’t see most people’s faces, only their eyes, but they see my whole face.

People are looking at each other closely, wondering “Who amongst us has the flu?”

The churches still have masses. The movie theatres are open. But all schools in this capital city are ordered to close for 10 days, starting tomorrow. Two brothers who are on the street selling face masks for $4 that have a 30-cent wholesale value are arrested based on outrage and charged with obstructing a public way.

On Monday, I visit the Mexico City tourist information kiosk in the huge Zocalo central plaza a block from my $15 a night hotel. I’m told the museums are closed which is unfortunate since I’d planned to go to the best museum in Mexico, the National Museum of Anthropology. Visits in previous years for a few hours at a time weren’t enough.

I’m seated in the mega church-sized Cathedral facing the Zocalo. I need to sneeze really bad, but I’m sure everyone would start praying for me (and themselves), so I suppress the urge. Outside, police hand out face masks. I accept one. I’m now wearing it in this internet cafe, like all the other customers because my face is hot.

Yesterday, the flu was the suspected cause of 50 deaths. This morning’s paper says it is 103. The internet reports it is 150.

I decide to treat myself to a Starbuck’s coffee. When I sit down inside to drink it, the security guard tells me to enjoy it on the open-air patio next to the sidewalk. A young man dressed for business asks if he can share my table, since no one may sit inside for fear of spreading the disease.

On Tuesday, the TV news is 100% focused on the swine flu: “Wear your mask. If you don’t, at least cover your coughs and sneezes with your forearm or bent elbow. Don’t greet anyone with a handshake or kiss. Wash your hands often.” The schools in all of Mexico are closed, not just those in the capital. At Starbucks, I may no longer sit on the outdoor patio. I do go in and sit at McDonalds, under speakers blaring loud music. I ask the manager to turn the volume down. He turns it off. No one else is there to enjoy it.

I’m now used to the mask hanging around my neck when it’s not on my face.

I go to the exclusive department store, Sanborns, to buy pastries to take out. As I enter I pull the mask up over my face. “Why is it all wet?” I wonder. I suppose when I hopped in the shower an hour ago, I forgot to take it off and it hung around my neck. At least it’s clean. Maybe it’ll last double the usual two-day life span.

On Wednesday, the government orders all restaurants, except those serving take-out food, to close. A line of masked customers stands outside of a Burger King waiting to order take-out. They’re allowed in, two or three at a time. I walk into Cafe Santo Domingo, next to the awe-inspiring Santo Domingo Church from the 1600’s, but after I purchase coffee, I’m on the street again. People snack on the few benches in the city. On mine is a homeless man. I don’t think he’s eaten today. Banamex, the mega-bank, urges customers to use its internet website. And, it says, please don’t come into the bank unless you’re wearing a mask (this is a time made for the likes of Jesse James).

Now 17 of 21 passengers in my subway car wear masks. The hundreds of cineplexes, cinemexes, cinepolises and other movie theatres are all closed. The bars have long since been shuttered, and all music concerts cancelled. The churches no longer say mass.

The city seems to be slowly melting away.

Tomorrow I’m making a bee-line for the U.S., with early stops at the Louisville Slugger Factory and the Louisville Bats Triple-A stadium and its 12,000 flu-free fanatics. Piece by piece, I’ll be home in Minnesota, where news will report every day on the epidemic I just survived.

Several years later, a research team reported that this H1N1 swine flu was a pandemic responsible for at least 17,000 deaths worldwide (and perhaps far more than that). Apparently, it originated in pigs from a very small region in central Mexico. (Science News, June 27, 2016, reporting the findings of a team headed by investigators at the Icahn School of Medicine at Mount Sinai Hospital.) The scientists said that their finding is the first time that the origin of an influenza pandemic virus was determined in such detail. The virus, they found, “was a mix of one North American swine virus that had jumped between birds, humans and pigs, and a second Eurasian swine virus, that circulated for more than 10 years in pigs in Mexico.” Then one emergent strain gained the capacity to infect humans. According to a lead researcher, “you cannot ignore small geographic areas with pig farms,” where the 2009 pandemic originated, “and which the next, perhaps more severe global flu may come from.”

The 2009 pandemic lasted over a year. It has continued to circulate as a seasonal influenza in several parts of the world, including the U.S. and Mexico. Hopefully we can all learn from this global pandemic.

You may also enjoy reading The Virus of Fear: How to Cope with Fear in Times of Uncertainty by Sara Fabian. 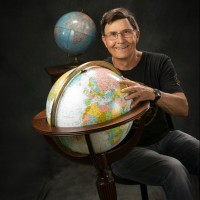 Tom Mattson grew up in Biwabik, Minnesota. He holds a juris doctor from the University of Minnesota and is a renowned travel author. Learn more at tomsglobe.com

Previous Post: « The Virus of Fear: How to Cope with Fear in Times of Uncertainty
Next Post: Desire and Fear: The Two Pillars of Relationship and Sexual Health »