I almost didn’t write this because I didn’t think I had anything to contribute or share that would be interesting to anyone.

I recently joined a group of beautiful intuitive women and felt like the odd one out, so I hid a bit in the background. I would listen to their stories and think, They are so intuitive. I’m not receiving any of that stuff! I want to be able to do it that way and that confidently too. Well here’s the kicker: Little did I know while I was so busy looking all around — I had actually already been doing it for years. I thought what I was experiencing was what everyone experienced. Wrong again!

My first realization that I had guardian angels (and that I was clairvoyant) happened while I was driving one day. I realized that every time I wanted to pass a car that was going too slow, there were cars coming at us that prevented me from passing. Then I noticed that a highway patrolman was one of them…phew, saved from that ticket. I was also saved a few times from potential wrecks I could have been in. After a series of these types of incidents, I suddenly realized that I have 4 huge muscular guardian angels, one at each of my wheels, guarding me and keeping me from harm in my car. I could see them in my mind. I also feel them walking by my sides. I kid you not.

It’s easy to overlook these seemingly mundane occurrences, like driving — but there’s nothing mundane about them. That’s how we miss them.

I am a Roman Catholic and was part of a charismatic prayer group. We regularly sang songs, read scripture and discussed it, and ended our meetings with a prayer circle to pray for each other’s intentions — or pray over one another by having one person sit in a chair while we placed our hands on the person. It was such an amazing experience of connection to ourselves, community and our higher source. I have always wanted to be a healer and a prayer warrior. Through this group, I was definitely a prayer warrior (and still am). When I placed my hands on a person’s shoulder and prayed over them, my hands would become so warm, and I felt a surge of heat flow through my arm. So powerful. People would often comment on how warm my hand had gotten.

My youngest son and I have always had a strong mother-son bond, even stronger than I have with my older children. He and I could feel each other’s emotions (empathic). It got crazy at times! He joined the National Guard last year. When he left for basic training, I felt scared to death, but also excited. So did he. During his second week there, he was moved to holdover for an issue they found with his paperwork. What should’ve been 2 or 3 weeks ended up being 12 weeks. I wasn’t sleeping well at night. I felt frantic and anxious and scared for my son. I would wake up at all hours of the night. When I would check with him, he told me he had woken up at the same time and felt the same things. So every time I woke up at night, I would pray for my son and talk to him to tell him I loved him because I felt that he was anxious, depressed, and becoming suicidal. I finally asked him about it, and he confirmed it. Eventually he was put back into basic training, and I immediately felt relief and at peace. So was he.

Even after all of this, I still felt like my intuitive skills weren’t working…until I took the bold step to join this cohort to become an Intuitive Life Coach. I didn’t speak much when I first joined. I listened to each of them as they spoke to hear their experiences and how their intuition was working for them. They each seemed to have such special gifts, and I somehow couldn’t activate mine…or so I thought. The more I went to class and the more I spoke about my experiences with them, the more I realized that I have these same gifts and some that are even unique to me. They just aren’t as strong as theirs yet. Some would say, I just haven’t yet claimed them fully. That doesn’t mean they won’t get there. I work on them every day doing simple things like paying attention to little thoughts that drift into my mind or songs that come on the radio or words I hear or roadside signs I see. Because here’s the thing — it all matters. I didn’t realize just how often I have seen or heard something I needed just at the moment I needed it most, until I began paying attention. And I bet if you paid attention, you’d see yours too.

This isn’t a race to the intuitive finish line. We all have gifts awaiting our activation, not our comparison.

All these years, I thought I was alone and I had to figure everything out on my own. Now I know I’ve been supported all along by my intuition, my guides, and my angels (and now my new friends). I say all of this to tell you that you have these same gifts. These are gifts we all have. I had to let go of being in control — of myself (always being the one who has it all together), my emotions, my situations — and begin to allow things to flow and to allow myself to feel things again. Once I began to feel again, I realized that I am receiving love and support all the time. And being seen and acknowledged and nudged to share my story is a part of this journey. I have since unleashed what feels like a whole new life force within me…all from taking one step of faith. You know what? I have something to say and so do you. Are you ready to step into it?

You may also enjoy reading Trusting Your Own Pace: 5 Strategies to Stop Comparing and Start Manifesting, by Elena Lipson. 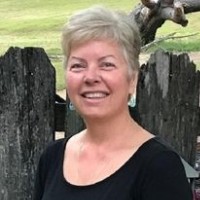 Georgia Ryle is a certified intuitive health coach who was diagnosed with hypothyroidism, leaky gut, and adrenal fatigue in her late thirties. By her early forties, she had added Hashimoto’s Disease to the party. Through nutrition, lifestyle changes, mindset shifts, and discovering how to listen to her own inner physician, Georgia learned how to heal her body and is now determined to help others do the same. Today, she helps women who are exhausted and feel unhealthy get back to themselves — to listen to their own inner guidance so they can feel healthy, vibrant, energetic and pain free. Georgia is from the Deep South (Mississippi). She is married with three children, four grandchildren, and 3 dogs. She loves counted cross-stitch, reading, going on adventures with her family, and walking outside in nature. Follow her on Facebook @simplehealthyvitality

Previous Post: « Collecting Soulful Wildflowers: Nurturing the Garden of Your Intuition
Next Post: A Limited Edition Of One: Owning & Unleashing Your Uniqueness »