How an addict turned his life around by seeking, listening and opening his mind to the wisdom and advice of others.

I was 26-years-old when I hit my bottom.

Since the age of 18, I had been a drug addict. I then had a slow, ugly downward spiral for eight years. Sometimes it went down much faster than other times, but it was always a slow burn of life getting worse. When I try to look back at those years, I find it all to be a giant blur. I can remember certain events but can never put it in any kind of chronological order. The pain and suffering are what I remember more than anything, though; I still can’t believe I came back from it.

I started smoking pot at age 18 and I quickly graduated to pain pills. This was around 2008 when the opiate epidemic really started booming. By age 20 I was a full-blown addict, stealing and manipulating my family, isolating myself from friends, doing nothing positive in my life. At age 21, I made it to my first treatment center.

I really thought that I had experienced enough pain to put an end to the whole mess.

I understood I couldn’t take opiates anymore and that they would ruin my life if I did. I had no idea what I was up against. The tricky thing with addiction is that acknowledging you have a problem and understanding you can no longer do drugs is just scratching the very surface of getting clean and sober. The problem is so much deeper than that which means it needs a much deeper solution than just acknowledgement and learning about drug addiction.

Unfortunately, I thought a proper education in drug addiction was all I needed — how wrong I was.

I spent another 5 years wanting, but not being able to, stop. The issue many active addicts have is that there is significant change that needs to occur in an addict’s life in order to change his life. Guidance and new ideas are so vital to getting clean, but it is also so hard for addicts to accept that because addicts at their core are very stubborn. They also would rather listen to ideas from their mind rather than someone else’s ideas on how they should approach getting clean from drugs.

Yet, the simple fact for drug addicts is that if they knew how to get clean, they probably would’ve done it long before their life got so bad.

Once I reached 26 I was a very beaten down soul. After many failed attempts at getting clean, I had isolated myself further from my family and friends than ever before. I was working for my father and when I got fired for stealing from his company I broke his heart. I soon holed myself up in a rented room and would stay up for days getting high without contacting anyone. It was the loneliest period of my life by far.

Then on March 17, 2015 I received a call from my mom letting me know my dad had passed away of a heart attack. I could not believe it. I went to the service and spent the next two months crying myself to sleep at night. As I mentioned, I was already at a major low when my dad had passed, but I sunk even further. I was living in a nightmare and it didn’t feel real.

When I had the opportunity to get help again in treatment, I agreed to it… but I had little hope of actually doing anything about my life. I felt like I was a lost cause and that it was my destiny to fail until the day I die.

It turns out that hopelessness became the foundation of me beginning a new life.

As opposed to every other time I went to treatment, this time I listened. Not only did I listen, I did what people told me to do. My input was no longer needed because I absolutely did not trust myself since every single one of my ideas the past 8 years had done nothing but destroy everything around me.

Beginning to take guidance did some wonders for me, but what really lit my inspiration on fire was wanting to make my dad, who was now gone, proud of me. He had expended so much energy trying to get me on the right path while he was around, I knew I wouldn’t be able to live with myself if I didn’t get it together and prove that his time spent on me was not a waste. That sentiment really set me moving forward without looking back and doing whatever was necessary to get clean.

We call this the gift of desperation in recovery.

Unfortunately, there is no formula to create true desperation; it usually happens when we hit a pretty severe bottom. Right after treatment I was determined to find people who could show me how to do things the right way. As they say, when the student is ready the teacher will appear. That is surely what happened when I met a group of men who had a few more years sober than me. They could detect my desperation and because of that, anything I had asked of them they provided.

Truly asking for help was something I had never done before. Sure, I would ask for help when I needed to go to detox, but after that I wanted to do this whole cleanup deal by myself. This time, however, I practiced transparency. Any time I felt a certain way or allowed fear to creep in, I talked to somebody about it and then we walked through the fear together.

Walking through fear is where I experienced major fulfillment and growth.

Previously, when I felt fear I didn’t go anywhere near it. I would run away from it, which kept me stagnant for years. Those first few times getting through a true fear was when I really saw what this whole transparency deal was about. It was also when I started to feel the benefits of recovery. I talked a lot about my fear of working a job since I had been such a terrible worker before entering recovery. The answer I was given was simple: try my best and that would be enough. That’s exactly what I did, and I quickly became a very reliable and accountable employee. It felt amazing.

It’s been nearly four years now of sobriety. I have been through many challenges including heartbreak and being laid off from a job. Life isn’t easy just because I don’t do drugs anymore. The great thing is, though, that now when things do go wrong, I don’t even get the urge to use.

The truest fact in my life today is that if I were to pick up drugs again, I have no idea where it would take me since there is no “just one time.” Drugs are not a solution, but following the steps, getting in tune with something greater than myself, and keeping a solid support network have all done wonders for me.

I can’t stress enough what a difference it made switching from always wanting to do it my way instead of the way of others who had done it before me.

Please, if you are suffering, seek the help you need and when you find it, listen to what you are told to do. It will save your life; it saved mine. 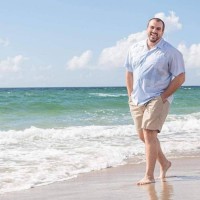 Daniel Wittler is an Outreach Specialist for Recovery Local, a local addiction/recovery based marketing company. He advocates long-term sobriety by writing for websites like  www.stodzyinternetmarketing.com, providing resources to recovering addicts.