How would you live… if you only had 6 months?

What if a doctor told you that you only had 6 months to live?

6 months to make those deep dormant dreams a reality?

6 months to travel to all the places you have always wanted to visit?

6 months to see all the people you’ve been wanting to see and hug?

Flashback to 3 ½ years ago: I found myself behind a cluttered desk that represented 15 years of devotion to the corporate dream, or should I say — someone else’s dream. I was completely unable to feel a cell in my body that represented who I was. I had lost myself for the ‘almighty dollar’.

Weary of the role I played helping ‘the corporate man’ build an empire at the expense of good people, I laid my head on my desk and began to cry. This went on to invoke a full-on panic attack, which further required breathing into a bag for several minutes to compose myself. I was beginning to get the message.

Crying behind a closed door had become the norm for me at work during the prior year. Day after day, I tolerated an emotionally toxic work environment filled with berating directions from a boss half my age. Daily affirmations of my incompetence had me fearing I was dispensable at any moment, even though I had given my heart and soul to my job. I endured this for the sake of a paycheck and sense of security. Some call them golden handcuffs. A healthy paycheck is a difficult thing to leave behind. So are co-workers you care about and love.

I watched the looks of concern as my co-workers contended with their own issues of integrity about it and as I sat in my office that pivotal day, a voice out of nowhere spoke to me in a way that I could no longer ignore. Although I had been hearing and disregarding it for months, on this day it spoke… rather loudly. The Universe is persistent that way.

“Cathy, if you only had 6 months to live — would you be living this way?”

It was a spontaneous, even guttural — “Hell No.”

Through the tears, I took to social media (which had become my private solace of outreach) and posted on Twitter, as if to proclaim to the world that enough was enough.

“I don’t know how I am going to live………. #IonlyknowhowImnotgoingtolive”

While I had declared that this was the day I was going to change it all, the reality is that I spent most of my time juggling the busyness of everyday life, motherhood and work. I was just trying to survive. Stress was at an all-time high, my cholesterol was through the roof, I had gained 20 lbs., and verbal abuse was peaking in my every day at work.

Emotional abuse plays funny games with your psyche. You live in a constant state of nervousness, hoping that you won’t say the wrong thing, or do the wrong thing. Hoping that you won’t be the one to ‘set things off’. You build a wall of self-protection around you, which allows you to tune out the truth of what is actually happening to you. In the workplace this doubles because, as in my case, I had gift-wrapped every bit of my self-worth around the three-letter title I held.

Yet, my self-worth was actually crumbling before my eyes and every piece of my inner spirit was becoming more and more foreign. However, in between it all, I journaled — I wrote to heal and had no idea that a book was being born.

Saddled with this awareness, for months I grappled to discern between the polarity of what I knew felt right and paralyzing fear of the unknown. I spent a great deal of my time in turmoil, teetering between the integrity of who I was and the paycheck that was the core of how I identified my survival. I also internally knew that if I planned on living another day — denial was no longer an option. Then I did something I had spent weeks fearing:

I stood up and declared to all involved, including myself, that I was done tolerating work place abuse on any and all levels.

My broken down, hiding-under-the-rock, muddied spirit had endured the worst conditions, yet the power of my inner spirit, the 1 ounce of the real me left, climbed to the top of my heart and declared, “Enough.”

As a result — the very next day I was fired. I spent the next 6 months on the couch feeling betrayed, confused and numb, nursing pain pills as a coping mechanism for my wounded back and psyche, in complete fear of what the future held. I felt like a self-medicated zombie.

Enter professional help with a mind-body therapist. It was within his trusted hands that he gently walked me back to life. Years of silently tolerating the workplace abuse led to a debilitating diagnosis of Post Traumatic Stress Disorder (PTSD). At first, I was completely unaware of any damage inside. Loud noises would startle me. In crowds of people, I became overwhelmed and a ringing in my ears would overshadow regular life noise. If I heard angry words, or witnessed people even in healthy arguments, I was triggered and went into fight or flight mode, looking for any way to escape.

As I started to educate myself on the ‘illness’, I began to see that when caught in dysfunctional and stressful situations and relationships, we cannot see the damage until we are on the other side of the situation. It consumes our rational mind in those moments as we silently fight for the way out.

One of the first steps was being instructed to do something for myself every day for two hours that brought me joy. Self-joy. I started to seek joy with a vengeance, and in these moments I met myself for what felt like the first time.

I was then introduced to the concept of “post-traumatic growth” by studying the work of Davidji, an internationally recognized expert on meditation, stress and trauma. His work guides us through daily meditation to support turning our traumas into something beneficial. In other words — it’s a recipe for making lemonade. I read Eckhart Tolle until I absorbed every beat of his drum on how to be in the present moment with our thoughts, and our actions. And I read, and I read, and I read.

The “Six Months to Live” project was in full force after those thirty days, as once you feel joy, I believe you are wired to follow it. You also create a space for other things to come in. I found joy in writing and began to feverishly document each week of discovering who I was again. Hello Cathy, nice to see you again. I began to place more emphasis on what and who was important, than going out and finding another job. I started to uncover my deepest regrets and where I had reacted with rage and resentment — where my deepest sources of unhappiness existed. I uncovered the emotions that were blocking me from living a life not in accordance with feelings of happiness and joy.

I found the importance in finding gratitude for the little things in life that we rush past and take for granted.

I realized how important my tribe (family) was to me — how I would feel if I lost them. I held onto the knowledge that life could change in an instant. I processed where I was hanging onto things that didn’t serve me and I learned to let them go. I embraced change. I got bolder. I took chances and I said yes to every event, spiritual arena, education and fun I could get my hands on with a feverish desire to live life RIGHT NOW and no longer be inhibited by the fear of an unknown tomorrow.

I got a life coach and together we peeled back the layers of me to uncover the life I had been striving for. I found peace in my heart. I found warmth and compassion for others. I discovered self-worth. I found joy in inspiring others. I began living each week as if it was my last and recognizing what was truly important to me.

And then, I self-published a book about the whole process. This book is my glass of lemonade. Six Months To Live: Making Each Day Matter, is my journey back from ‘Corporate America’ to me. I learned how to incorporate ‘life’ into living and how to relish feeling aliveness in each moment of each day. I learned how to smile again.

Although perhaps a controversial title to some, Six Months To Live is not a book about dying, but rather one about living.

It is about uncovering how to live your life in alignment with who you really are. It is an internal discovery of the questions we should all be asking ourselves. I recently filmed a video in Santa Monica, California where I brought out a white board and wrote on it “What would you do if you only had 6 months to live?”

The response was light and contemplative until a woman walked up to me and told me she had just been given a prognosis of 3 months to live. She was here in California to partake in a clinical study for the aggressive cancer invading her body. Speechless, I feared that I had somehow insulted her by posing this ‘theoretical’ question.

I shared my fear with her and she immediately responded by saying something that I will never forget. “No, not insulting at all. Everyone should be asking themselves this question, because when faced with the reality that your life can be taken from you — you live it very differently.” Then she leaned in and hugged me, longer than you might usually hug a stranger, as if it was our last hug. I can still feel that embrace. From that moment on I hugged everyone differently, with a knowing it may be our last hug — with the gratitude of the present moment.

Ask yourself, if you only had 6 months to live, what and who would matter to you now? When we stray from ourselves repeatedly for years — the distance grows cavernous and with that, small pieces of our essence fade away and die. In the honesty of those answers, you will uncover and reconnect to your true self.

And I promise, it’s a game-changer. 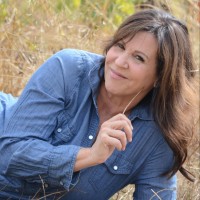 Cathy Anello is a Certified Angel Card Intuitive, Blogger at cathslife.com Author, Fitness Instructor, Mentor and Inspiration to all who know her. Learn more at cathyanello.com