Life as a refugee is filled with heartache, struggle and myriad challenges, but also the opportunity to reinvent yourself.

Becoming a refugee means starting life anew. Most refugees experience journeys that are not only long and difficult, but also dangerous and emotionally taxing. Amidst myriad struggles and inconceivable challenges, the feeling of expulsion from their homelands is a painful reality that refugees must face on a daily basis.

In November 2006, when the internal and sectarian war in Iraq was at its peak, my parents decided to leave Iraq after receiving many letters threatening death since my Sunni father and Shia mother dared to fall in love and create a family. While my father was debating the idea of leaving our home, his cousin was kidnapped, tortured, killed and thrown like trash on the street in Baghdad. This action was a clear message that we had to leave the county at once. As we fled Iraq, our family was questioned at gunpoint multiple times. At each checkpoint, officials demanded to know which sect of Islam we followed. We miraculously satisfied their questions and were allowed to pass. That is how, with grave trepidation, my family made our way to Syria.

When we arrived in Syria with barely more than the clothes on our backs, it was through the kindness of strangers that we were able to secure a one-bedroom apartment for my family of seven.

Though a far cry from our comfortable home and our once happy and prosperous life in Iraq, it provided us safe respite as we waited to be granted refugee status outside the Middle East — a process that took two long years.

The term ‘culture shock’ was unfamiliar to me back then, but now, having lived as a refugee, I am all too familiar with this phenomenon.

Though the Syrian people were friendly, I never fully integrated into Syrian society. Instead of going to school, I would run to my aunt and cry about my feelings. As an exile, I was never able to acclimate or make friends. All I dreamed of was returning home. It was painful for a young girl who lived a life of relative luxury in Iraq to face the paltry life of a refugee in Syria, even going hungry at times so my family could be safe and avoid a war we had nothing to do with.

In 2008, once we were finally recognized as refugees, my family and I immigrated to the United States.

The moment our plane touched down at O’Hare Airport in Chicago was the happiest and most exciting day of my life. As our plane rumbled towards the terminal, I believed my family and I were safe and my fondest dream of finishing my education was now within my reach. Unfortunately, my rosy dreams were soon crushed as I came to realize what my life as a refugee would actually entail:

Extreme emotional struggles, feelings of exclusion, identity crisis, questioning my own religion, and the loss of homeland.

There were times, as my family and I agonized, that we wondered if we had made the right decision to flee Iraq and make our home in the United States.

Being a refugee can be as challenging as living in a war zone. I always say, “It is not easy being a refugee.” Why? Because we must overcome the culture shock, language barrier, and religious differences — all while learning how to live and function in a new community and country. For most refugees, they must accept that many years have been wasted doing nothing while living as a war victim in a foreign country. For some refugees, they also suffer being away from their families who were left behind.

When my family arrived in the USA, I had my high school diploma from Syria and was eager to continue my education. Unfortunately, I was encouraged to work, save for college, and waste many years of my life before being able to attend any school; but I refused. Instead, I decided to take ESL classes, improve my English, and work on my degree.

During the three years it took to finish those main courses, I struggled, cried, and lost sleep over my studies.

When I attended classes, I didn’t understand what my teacher was saying, so I had to go around and ask the other students to explain to me slowly. Eventually, I was able to obtain my Bachelor of Art in Humanities, become a mother, and run our family business.

Life can be very challenging for refugees, but we have so much potential. We all come from different backgrounds, brought together to shape a society that we know nothing about. Our differences are the beauty in this strange mixture that forms our unity. Most, if not all, are born out of a great struggle.

I chose to emerge from the purge in Baghdad to surge in the American society and integrate with its people as they welcomed me with open arms.

Being a refugee comes in a package of unforeseen obstacles. In addition to suffering through extreme trauma that often goes unaddressed, comes the feeling of exclusion. Not feeling like you fit well into your new culture or community is fine at the beginning, but if these feelings linger for more than a year, then there is a problem that needs to be solved. There are many different ways to integrate into the society — such as studying, volunteering, or inviting your neighbors over for dinner to talk about the cultural similarities and differences. In doing so, you are rebuilding yourself to live. Even though you may continue to feel that you have wasted years in exile while crying for home, you have to keep in mind that this old home might not be there for you anymore.

I have seen many dreams of mine crushed before my eyes, while I have seen others flourishing to give me a sense of home and hope.

I have decided to stick with the pursuit of the dreams I deem possible with the help of my secret weapon: education. Yes, I have cried for home almost 12 years now, but I realized that without education, returning home will not contribute to rebuilding. That’s why I decided to continue my higher education with Peace and Conflict studies which helped me understand how to build peace personally, locally and internationally.

I can finally say that at last, I am at peace with myself. I have obtained many certificates and awards through my education and study. Yes, I have worked hard to be where I am today, but if I was able to do it, then other refugees can, as well. You just need to have the will for it.

You may also enjoy reading When One Door Closes | The Lopez Effect: Transforming Self & Community by Nadia Lopez 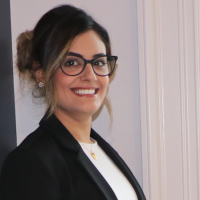 I was born and raised in Iraq-Baghdad until the sectarian war tore my country apart. I am currently a graduate student in the Peace and Conflict Study Program at the University of North Carolina at Greensboro, and will be graduating Spring 2019. Follow on Instagram