In time, may our biases, prejudices and judgments melt away as we realize that love is love, end of story

As time elapsed, the controllers realized that the economy boomed when blues and whites combined into what was known as a unit. These blues and whites, together, gave life to mini-blues and mini-whites, who were, in turn, encouraged to recreate the same unit over and over ad infinitum. Eventually, as the unit became mainstream, the blue inhabitants who were inclined toward blues (let’s call them blues on blues for now) and the whites who were inclined toward whites (let’s refer to them as whites on whites for now) were ostracized because they were not contributing to the dynamic. They were a threat because they could not bring more blues and whites to the planet; and because they were ruining the ideal template created in the minds of the controllers. They were also not beneficial to tribes and societies who were trying to expand into an empire. After all, power is in numbers. So, it was planted in the mindset of all that blues on blues and whites on whites are evil.

In case you decide to believe the above narrative, please note that it is a fictional one. All our stories should come with this warning, so that we don’t believe we are doing the world a favor by adopting an ideology that creates division. Whether one believes this narrative or that narrative about what is so obviously a reference to the LGBTQ+ community, the truth of the matter is that many versions of this tale have permeated our psyche. The result? Hate, torture, murder, emotional trauma, and the dissolution of the greater family unit — the very unit that is beneficial to global community.

What has made society so afraid of the LGBTQ+ community? An idea. That’s it.

When the idea dissolves, our mind, if noble enough, will scurry to fill the vacuum with an idea that serves the world better. Instead, we fill it with even more narratives. The latest narrative tells a tale about agendas: Why is there a gay character in every cartoon? Why is there a gay character in every movie today? Why are they teaching kids about gay people at school? The mind loves to latch on to conspiracy theories and fear. But, regardless of what our minds tell us, the appearance of LGBTQ+ characters is not because the director or the teacher wants to make your child gay. You can’t make someone gay. In fact, many a gay person today would tell you they wouldn’t wish being gay on anyone because of the amount of bullying and fear they have been exposed to. The reason that the LGBTQ+ is highlighted is because a new narrative is permeating the collective: one that speaks of embracing diversity and waltzing with nonresistance. This new narrative reminds us that being gay is as natural as being “straight.” And the narrative is not fictional. It is our reality. Look around. You who reads this most definitely knows someone who is gay or are gay yourself. Are you part of an agenda? And if you are, then hats off to you for being part of an agenda to teach people about acceptance.

For too long, the gay community has been ostracized and made to feel dirty, unwelcome, and even worthy of punishment.

In this patriarchy, it’s okay to be a “straight” man and sow your wild oats, but it’s unacceptable if you are a gay person who loves one person who happens to share your anatomy. All in all, promiscuity has nothing to do with one’s sexual inclination. It has to do with a person’s behavioral tendencies and can even be attributed to biological properties. Enough. Haven’t we had enough?

I want you to think about that gay relative or friend who you haven’t spoken to in years. And I want to ask you: What is the crime? Let me give you a hint. The crime has nothing to do with who that person loves but with arrogance. Anyone who blocks another human being because of who s/he loves is the one who requires therapy or a boot camp (not the other way around).

And now, let’s address the “T” of the LGBTQ+ spectrum. In our community, transgenders are taunted for “impersonating the other sex.” This was criminalized in Kuwait as recently as 2007. Not that it should matter one bit whether a transgender person is gay or not, but there is a misconception here that all transgender people are gay. This is false. Being transgender may or may not have something to do with one’s inclination. Yet not necessarily. Whatever the case, the question is: When did clothing become an indication of one’s inclination in the first place? International women fashion magazines regularly present female models in men’s shoes and androgynous clothing. Should they be arrested here? Men in Arabia used to have long hair and wear eyeliner. There are still conservative men who have long hair. Should they be arrested today? And if so, what would the interrogation process look like? “Are you gay?” “No sir, I just like wearing women’s clothing.” “Are you sure?” “Yes.” “Okay, we will release you with a warning, but we don’t want to see you in here again.” In extreme cases, the man will be sexually harassed by the interrogators — the same men who are against man-on-man contact.

We have a lot of issues in Kuwait that warrant our attention: corruption, the environment, the treatment of expatriates, the growing intolerance toward those of other faiths, the rights of domestic workers and women, and so much more. These are what makes a society move forward. Instead, we are bombarded by one divisive idea after another that only serves to create more emotional and physical trauma for all of us involved.

Today, in some parts of the world, the narrative is changing, but the situation is still far from resolved.

Supporting the gay community has become trendy and so has been exploited by business and politicians. These, however, are not reasons, to support the LGBTQ+ community, but at least they are a beginning: a first step to remembering that the world can become less of a nightmare when we unify. And if it’s now trendy, then that’s a good sign. It means we know, on a deep level, that bigotry is uncool. In time, perhaps our shallow intentions will be replaced with a genuine acceptance of everyone on the LGBTQ+ spectrum without any ulterior motive on our part. And, in time we will add H to the spectrum for heterosexual, to show that it’s just another way of expressing our inclination and there is no separation. We are all colors of the rainbow. Finally, in time, we won’t have any spectrum, and there will be no need for protests or rights because we will get it. We will get that there was nothing frightening about anyone’s inclinations in the first place. And we will get that all this came about because of an idea, a divisive idea that told us who to hate.

When we can recognize that the fear and animosity was just a program, that is when we will know we have evolved.

For now, it’s high time we change the narrative, to change any narrative in which a person is killed, thrown off a balcony, arrested, taunted, interrogated, warned, or thrown out of the family home because of who s/he loves.

You may also enjoy Interview: Glennon Doyle | The New Activism with Kristen Noel 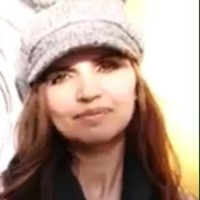 Nejoud Al-Yagout is the founder of Interheart Kuwait (previously known as Co-Exist Kuwait). She is a poet, novelist, columnist, and essayist based in Kuwait. Learn more at www.interheartkuwait.com

Previous Post: « Mature Optimism: Balancing Beauty, Tragedy and Hope in a Complicated World
Next Post: 7 Ways to Release Grief from Your Body »