Dopamine production is a natural way to stay positive, motivated, and conquer the curve balls life throws at you

Dopamine is one of the neurotransmitter chemicals released in the brain. When this chemical is released in large amounts, it induces feelings of pleasure which keeps a person to work hard in anticipation of a reward. Dopamine also promotes clear thinking and improves memory.

In controlled research environments, scientists found a direct correlation between people willing to work hard and the degree of dopamine in their brain. Similarly, people with a low level of dopamine often feel less motivated or enthusiastic to do anything.

There are different ways to naturally increase the dopamine level in your body. Let’s look at 9 of these:

There are 23 types of amino acid, the small building blocks that make up protein. Some amino acids the body produces and some we get from food. Tyrosine is an amino acid that plays a vital role in producing dopamine. With the help of enzymes in the body, the tyrosine is converted into dopamine. It is important to have proper levels of tyrosine in the body to help with adequate production of dopamine. Phenylalanine is found in another amino acid which then produces tyrosine. Food such as beef, eggs, turkey, soy, dairy, and legumes are rich in proteins, tyrosine and phenylalanine specifically.

Scientists recently discovered that the brain and the gut are intricately connected. The gut has a large number of cells that produce neurotransmitter molecules; this is one of the reasons it is often called the second brain. There are certain bacteria found in the gut that produce dopamine. Some of these strains of bacteria can be found in probiotics, thus contributing to increased dopamine production

To increase endorphin levels and improve your mood, try yoga. In a recent study, it has been said that yoga can increase and regulate the dopamine level found in the brain. People who suffer from Parkinson’s can do yoga regularly to increase the dopamine level in the body and help with better control over body movements.

Doing yoga for an hour every day is sufficient to help release enough dopamine to make you feel better. Yoga can also help to increase flexibility, energy levels and sleep quality. That is definitely extra motivation to hit a fitness center or yoga studio near you.

4. Get A Good Night’s Sleep

Dopamine, when released in the morning, helps you stay alert and enthusiastic throughout the day. In the evening, the level of dopamine falls and lets you know it is time to sleep. Lack of sleep lowers the production of dopamine. Getting good quality sleep helps to maintain your dopamine levels.

Meditating can help you stay focused and clear your mind. It also improves your physical and mental health by increasing the dopamine level in the brain. One hour of meditation releases more dopamine than equal time resting. You can stand, sit, or walk for meditation. Meditating through yoga can help even more in making a person feel positive and motivated.

Music helps to stimulate the production of dopamine. Listening to music releases dopamine to the pleasure areas of the brain thus elevating a person’s mood. In recent studies, they have found that melodic music increases the dopamine level. Listening to music can also help people who suffer from Parkinson’s diseases by improving their fine motor control for better body functioning.

Velvet beans naturally have L-dopa in them. Consuming these beans increases the dopamine level naturally. These beans are additionally beneficial for people who suffer from Parkinson’s disease to improve their body movements. Studies show that people who suffer from Parkinson’s and consumed 250 grams of these beans showed reduced their symptoms in just one to two hours after consumption.

Vitamins and minerals, such as niacin, vitamin B6, iron, and foliate, can increase the dopamine in the body. The blood helps to determine if the body needs these nutrients. If needed, supplements can be taken to maintain the level.

You may also enjoy reading From Medication to Meditation: A Journey From Depression to Peace by Laura Bishop 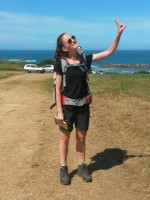 Lynda Arbon is a passionate and enthusiastic health blogger. She likes keeping herself updated on health trends and blogs. Her favourite pastime is learning history and solving crossword puzzles. Follow her on Twitter.

Previous Post: « Helping Your Child When They Have Anxiety About Going to School
Next Post: Worry vs. Mindfulness: A Life Lesson »