When I was just a bright-eyed youngster with out-of-control curls, I wanted to be EVERYTHING. A detective solving mysteries? Yes, please. A jet-setting musician? Oh yeah. A board game designer? OMG. A filmmaker? Gimme.

As I moved through my teens and into my twenties, a disturbing ‘fact’ began to sink in: I could only be one thing. I was going to have to choose.

And so, I chose. Well, I tried to choose.

I studied art for two years, went to film school and built a nice freelance web design side hustle. I even got a law degree! I threw myself into each new project or discipline with intense curiosity and passion and learned a great deal about it. Then, after a few years, I began to feel the itch: a sense of boredom that expanded until I couldn’t stand it any longer and had to move on.

I used to beat myself up about this ‘fatal flaw’ of mine. I worried that I would never find that holy grail: the thing I was meant to do with my life.

I worried that I was broken, afraid of commitment, doomed to be chronically unsatisfied, or worse: a jack-of-all-trades, master of none.

It wasn’t until my mid-twenties that I began to question this narrative. I started considering the possibility that maybe my discomfort with making a lifelong commitment to a single discipline wasn’t so unusual, or so bad. If this was just a product of the way I was wired, I realized I had to find a way to stop fighting it and make it work for me instead.

I began to seek out other people who were interested in many things, especially those who were pursuing multiple fields professionally. I wanted to know these people — the intricacies of their minds, the connections between their different passions, and (importantly) how they made a living.

In 2010, I created a brand new website where I could share what I was learning with others. I called it Puttylike, because it’s for people like me, people who change shape and morph into new identities. We’re malleable, like putty. As more and more of us began to come out of the woodwork, I came to refer to our type as ‘multipotentialites’. Apparently, this was a Thing.

One of my most important findings has been that multipotentialites are some of the most creative, intelligent, and — yes — successful people on the planet.

They just structure their careers a little differently. Through my work at Puttylike, I met CEOs, engineers, artists, educators, and sometimes people who were all of these things (and more) at the same time!

It eventually dawned on me that there needed to be a book about this — not just a tome about the phenomenon of multipotentiality, but a practical guide. Multipotentialites needed something to help them design lives and careers that allowed them to do many things, in a real, sustainable way.

I decided to write that book. I surveyed thousands of people and conducted in-depth interviews with over 50 successful multipotentialites. It was fascinating. Even though everyone had radically different jobs, there were some significant commonalities in how they had built their careers and structured their work.

I’m hoping my new book How to Be Everything blows people’s minds (in a good way). I also hope it provides some much-needed guidance to those of us who feel like the traditional, linear path just isn’t the right fit.

You may also enjoy reading Poetry, Wonder and the Creative Mind, by Jeffrey Davis 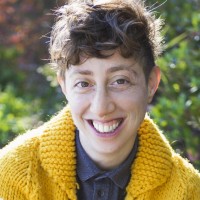 Emilie Wapnick is a writer, career coach, and community leader. She is the founder of Puttylike.com, where she helps multipotentialites – people with many passions and creative pursuits – integrate all of their interests to create dynamic, fulfilling careers and lives. Emilie’s TED talk has been viewed over 3.6 million times. She is the author of How to Be Everything: A Guide for Those Who (Still) Don’t Know What They Want to Be When They Grow Up (HarperOne; May 2017).

Previous Post: « The Transformative Power of Grit: The Passionate Pursuit of Hard Goals
Next Post: The Alchemy of Humor | Using Comedy to Heal From a Wounded Past »