For some of us, sports areabout having a healthy body and a healthy mind. For others, sports are their only hope to get out of their low-profile existence. Alex McCain, CEO at assignmentholic.co.uk, emphasizes that …

“Sports can create a fruitful environment for teenagers and adults alike. They challenges your mind, your body, and develops the skills you will frequently leverage later on in your life.”

Here are 5 inspirational and motivational stories about people whose lives were changed by sports:

Born in 1992 in Mogi das Cruzes, São Paulo, Brazil, Neymar grew up in a very poor environment playingfootball (soccer) on the streets and beaches close to his home.

His family was so poor — he had to go to the worst schools in the neighborhood, they couldn’t afford electricity, and once had to move into their grandparents house to save money, sleeping in a tiny bedroom.Since he couldn’t afford to learn proper English or to attend a proper school,he decided to do what he does best: play football.

One day at the beach, he was spotted by Betinho dos Santos (a professional futsal player) while playing football with his mates. Recognizing his inherent talent, Betinho immediately took Neymarto futsal training, which ignitedhis strong passion for football.

Neymar’s talent brought him incredible success on a world stage, but this doesn’t mean that his life was easy; in fact, his childhood was extremely tough and it is his grace in football which belies those challenges.

Neymar suffered a terrible injury during his match against Colombia in 2014, breaking a bone in his back. An injury can be terrifying for an athlete, since it can abruptly end your career. Thankfully, this was not the case for Neymar.

Despite his earned success, Neymar struggled with fame and he made some unwise decisions during his matches and through his life of celebrity. But his career stands as a testament to how an undying commitment to one’s passion, against all odds, can completely transform life’s trajectory.

The Dallas Mavericks star had quite a rough life before he became a professional basketball player.

For Luka Doncic, basketball was the only way to keep growing and evolving beyond the hardships he faced as a young individual.

Born in Slovenia, a third-tier world economy, Doncic connected with sports from an early age. While he was going through some very difficult times dealing with his parents’ divorce, Luka decided to tattoo himself with the following Latin phrase: “non-desistas, non-exieris,” which means “never give up, never surrender.” Despite his personal issues and setbacks, his passion, focus, and talent for basketball allowed him to ‘get out of his mess’.

At the age of 16, Doncic was playing for Real Madrid, becoming the youngest player in the history of Madrid’s team. Being so young and famous, everybody wondered if he could keep it up; this created an internal pressure to prove himself. More recently, he suffered a knee injury —but he is far from giving up.

Dana DeArmond, a sports blogger, notes: “Luka Doncic is another example of how sports can change people’s lives. You are doing what you love and it you can get from rags to riches in the meantime.”

Born in Rosario, Argentina, the five-time Balon d’Or winner and Barcelona FC’s all-time-top-scorerhas more than 600 goals under his belt.

Lionel Messi started playing football (soccer) as a little kid, and by the time he was 11 years old, he was considered one of the best! At the same time, doctors diagnosed him with a growth hormone deficit. Messi’s condition didn’t allow him to play football unless he received treatment, but that was something that Messi’s family couldn’t afford at the time. After a long period of searching for the needed funds, his family asked for help from Barcelona FC officials. They generously offered them the financial support which allowed this young prodigy to continue his football career with the club.

What’s important to note about Messi is that he knew exactly what he wanted from the beginning.

He knew that professional football would be his leap towards salvation. The odds were against him for ‘making it big’, yet his passion, confidence, and pure faith helped him find a way.

Messi had a hard path until he made it, but in the times he struggled he had his family by his side. We all need support in rough times, and we should all be as grateful as Messi is — when he celebrates his goals, he’s always looking and pointing up to the sky in tribute to Celia, his loving grandmother.

Usain Bolt is a sprinter of incredible talent thatmanaged to become a 9-time gold medalist at the Olympic Summer Games.

Born in the rural town of Jamaica, a very poor country, Bolt started practicing athletics from an early age. His best memories are the special days that he used to play football and cricket with his brother, Sadiki. By the age of twelve, he was his school’s second-fastest runner, reaching 100-meter distances two times faster than his colleagues.

People use to call him “the fastest man alive,” because of his fabulous speed.

On 16 August 2009, he broke the world speed record for the 100-meter sprint competition. With an average speed of around 37 kilometers per hour, Bolt finished the race in 9.58 seconds.

After earning several gold medals from the 2012 World Olympics and the 2013 World Championships, Usain struggled with injuries. He knew that he was prone to serious accidents, yet he was willing to assume the risks.

Today, his net worth is estimated at around $34-35 million.Most of this fortune is invested in humanitarian causes to help children coming from disadvantaged backgrounds reach their maximum potential.

He remained strong on his journey, as he could find motivation even in the darkest places: “I’d like to say to all my fans out there, thanks for all the support. And to all my doubters, thank you very much because you guys also pushed me.”

Born Cassius Marcellus Clay, Jr. — and nicknamed “The Greatest” or “The King of Boxing”— Muhammad Ali was one of the most prominent figures in boxing and became a celebrity of world renown.

Born in a poor neighborhood of Louisville, Kentucky, Ali started boxing at the age of twelve. His father was a sign painter, so he grew up modestly, but not with extreme poverty. By the age of 22, he managed to win the World Heavyweight Championship in a match against Sonny Liston, a victory that would cast him as an icon of sports legends. In his entire professional career, he had 61 matches, with 56 of them being won and only 5 lost.

Ali was a fighter. In addition to all the matches in the ring, The Greatest also fought the U.S.government for years in response to his opposition to the Vietnam War and his refusal to be drafted. And then battled with Parkinson’s disease. Ali was always self-conscious and self-aware of his strengths and weaknesses. His disease, in contrast with his career, forced him look at life from a different perspective, and actually helped him accept life’s later challenges rather than allowing them to destroy him.

Ali understood himself well; he knew exactly how professional boxing would turn out for him — the ascent to greatness, and also his inevitable decline. His uber-confidence was palpable in all of his  fights, a reflection of both his charismatic showmanship and his athletic passion which propelled him to the pinnacle of his sport.

I am not a professional athlete. However, I’ve always seen the value of practicing sports, personally and professionally.

Basketball saved my life. When I was 10, the sports doctor who examined my entire team noticed some disconcerting sounds while checking my heart. Before clearing me to play, he urged me to investigate to see if I had any heart issues. I went to two doctors who both told me I wa fine. However, my mother was not satisfied and insisted that we dig deeper, so we went to a third doctor who discovered an urgent problem and sent me for immediate emergency heart surgery. Without it, I was told, I wouldn’t have lived.

After my heart surgery, I didn’t play basketball for one year. I really missed it! I realized that it wasn’t just the passing or shooting; it was the entire atmosphere: the team camaraderie, the life lessons, the fun, the experiences. Whenever I wonder how someone can only think about themselves, I imagine that they probably didn’t play a team sport, or have any brothers, or had the chance to know what sharing actually means.

Sports can help people aim for a better condition than the one they had during their childhood; they can provide a path of growth where alternatives are not seen, instilling purpose, accomplishment and self-esteem.

For me, besides being a real life-savior, basketball was the #1 influencing factor that helped me grow my self-confidence both on the courtand in real life!

You may also enjoy reading Against All Odds: A Story of Triumph, Perseverance, Healing and Service by Shawn Wells 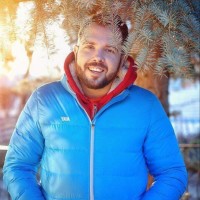 Justin Osborne is a writer at best paper writing service and best essay writer. He loves to share his thoughts and opinions about education, writing and blogging with other people on different blogs and forums. Currently, he is working as a content marketer at Rush My Essay and custom essay writing help.

Previous Post: « A Single Woman’s Guide To A Happy And Healthy Lifestyle
Next Post: How Drug Abuse Affects Those Around You »