Exploring the dark corner of grief and suffering: blame

There’s such a pervasive weirdness in our culture around grief and death.

We judge, and then we blame, dissect, and minimize. People look for the flaws in what someone did to get to this place: She didn’t exercise enough. Didn’t take enough vitamins. Took too many. He shouldn’t have been walking on that side of the road. They shouldn’t have gone to that country if it has a history of monsoons. If he’s that upset, he must not have been very stable before this happened. I bet they had unresolved childhood issues—see what unhealed issues do to you?

I have a theory (as yet scientifically unproven) that the more random or out-of-order the loss, the more judgment and correction the grieving person hears.

It’s like we just can’t reconcile the fact that someone could be alive and well at breakfast and dead by lunch. We can’t understand how someone who ate well, exercised, and was a generally good human being can get cancer and die at the age of thirty-four. We can’t understand how a perfectly healthy child can drop dead of what started as a simple cough. How someone biking to work, using a dedicated bike lane, wearing reflective clothing, their bike adorned with flashing lights, can be struck and killed in an instant.

Or, how on a beautiful, ordinary summer day in 2009, I could watch my partner, Matt, drown. Matt was strong, fit, and healthy. He was just three months away from his fortieth birthday. With his abilities and experience, there was no reason he should have drowned.

Losses like this highlight the tenuous nature of life. How easily, how quickly life can change. It’s terrifying to think that someone who seemingly did everything right could still die. It’s also terrifying to look at a person torn apart by their grief, knowing that could be us someday.

When Matt died, the one (and only) news story I read blamed him for his death because he wasn’t wearing a life jacket — to go swimming. The more polite comments underneath the article made Matt into an angel, looking over everyone, even those who didn’t know him; his work on earth was done. Far more of the comments blamed me for ‘making’ him go in the water, or castigated both of us for being too stupid to know better.

In the days after Matt died, I overheard more than one conversation in which people judged my response to Matt’s death quite unfavorably. Keep in mind that I wasn’t publicly screaming, didn’t hit anyone, and wasn’t causing big ‘scenes’ anywhere. I was simply—openly—very, very sad.

Victim Shaming and the Culture of Blame

My experience of blame and judgment, both for my grief, and of Matt in regards to his own death, is not unique. Most grieving people have felt judged and shamed inside their pain.

Especially when the loss is unusual or accidental, the backlash of blame is intense. We immediately point out what someone else did wrong. That person did something ridiculous or stupid; we would never do that. It soothes our brains, in some ways, to believe that through our own good sense, we, and all those we love, can be kept safe. And if something bad did happen (through no fault of our own), we’d be strong enough to handle it. Grief wouldn’t take us down like that; we’d deal with it so much better than that other person. Everything will be OK.

Brené Brown’s research states that blame is a way to discharge pain and discomfort. Intense grief is a reminder that our lives here are tenuous at best. Evidence of someone else’s nightmare is proof that we could be next. That’s seriously uncomfortable evidence. We have to do some fancy footwork (or rather, fancy brain-work) to minimize our discomfort and maintain our sense of safety.

When someone comes to you in your pain and says, “I can’t even imagine,” the truth is: They can imagine. Their brains automatically began to imagine. As mammals, neuro-biologically, we’re connected to each other. Empathy is actually a limbic system connection with the other person’s pain (or their joy). Being close to someone else’s pain makes us feel pain. Our brains know we’re connected.

Seeing someone in pain touches off a reaction in us, and that reaction makes us very uncomfortable. Faced with this visceral knowledge that we, too, could be in a similar situation, we shut down our empathy centers. We deny our connection. We shift into judgment and blame. It’s an emotionally protective instinct. In many different ways, in many different forms, our response to others’ pain is to lobby blame: If something terrible happens, you brought it on yourself.

At the root of our fears around grief, and in our approaches to grief and loss, is a fear of connection, and a fear of acknowledging — really feeling — our relatedness. What happens to one person can happen to anyone. We see ourselves reflected in another person’s pain, and we don’t like to see ourselves there.

Disasters and deaths bring out a level of emotional empathy that asks you to go there, to acknowledge that this could happen to you or someone you love, no matter how safe you try to be. We hate to see evidence of the fact that there is very little in this life over which we have control. We’ll do almost anything to avoid letting that in.

What starts as limbic system-based connection reverts to a brainstem survival instinct. It’s an us-or-them response, one that puts those in pain on the wrong side of the line, and us, always on the right. We distance ourselves from pain rather than feel annihilated by it. The culture of blame keeps us safe. Or rather, it lets us believe we’re safe.

Down the Rabbit Hole of Pain Avoidance

To maintain this belief, we’ve created — and sustained — an entire culture based on a magical thinking continuum: think the right thoughts, do the right things, be evolved/non-attached/optimistic/faithful enough and everything will be OK.

Pain and grief are never seen as healthy responses to loss. They’re far too threatening for that. We resist them in equal measure to our fear of being consumed by them.

The problem with this (among many problems) is that it creates a societally acceptable blame structure in which any kind of hardship or pain is met with shame, judgment, and an admonishment to quickly get back to ‘normal’. If you can’t rise above it, you are, once again, doing something wrong.

Pain has to be welcomed and understood and given actual true space at the table. Otherwise, we cannot do the work we do, whether that is the personal work of showing up and staying alive, or the wider global work of making the world safe, equitable, and beautiful for all beings. We have to be able to say what’s true without fear of being seen as weak, damaged, or somehow failing the cultural storyline. We need to make it just as normal to talk about our pain as it is to talk about our joy.

There is no need to rush redemption.

Hard, painful, terrible things happen. That is the nature of being alive, here in this world. Not everything works out; not everything happens for a reason. The real path here, the real way forward, is not in denying that irredeemable pain exists, but by acknowledging that it does. By becoming a culture strong enough to bear witness to pain. By sticking together inside what hurts. By opening ourselves to each other’s pain, knowing that this could be us the next time around.

When we’re afraid of loss, we cling to a system of right and wrong, of well and unwell, in order to safeguard our connections to those we love. We think barricading ourselves against pain and suffering will help us survive.

Our deeply embedded aversion to acknowledging pain and hardship keeps us from what we most want: Safety in the form of love, connection, and kinship. We defend ourselves against losing it, but in doing so we keep ourselves from living it.

The tricky thing is, true survival never exists in a world where we have to lie about our own hearts, or pretend we’re more in control than we are. It just makes us desperately more anxious, and more rabid in our attempts to make everything work out in the end.

The most efficient and effective way to be ‘safe’ in this world is to stop denying that hard and impossible things happen. Telling the truth allows us to connect, to fully enter the experience of another and feel with them.

Real safety is in entering each other’s pain, recognizing ourselves inside it. As one of my oldest teachers used to say, Poignancy is kinship. It’s evidence of connection. That we hurt for each other shows our relatedness. Our limbic systems, our hearts, and our bodies are made for this; we long for that connection. That you see your own potential for grief and loss in someone else’s grief? That’s beautiful.

When emotion comes up, we can let that poignancy run through us. It hurts, but it hurts because we’re related, because we’re connected. It should hurt. There’s nothing wrong with that. When we recognize pain and grief as a healthy response to loss, we can respond with skill and grace, rather than blame and bypass. We can respond by loving each other, no matter what happens.

Finding safety means to come together, with open hearts and a willing curiosity about everything we experience: love, joy, optimism, fear, loss, and heartbreak. When there is nothing we can’t answer with love and connection, we have a safety that can’t be taken away by the external forces of the world. It won’t keep us from loss, but it will let us feel held and supported inside what cannot be made right.

The real cutting edge of growth and development is in hurting with each other. It’s in companionship, not correction. Acknowledgment — being seen and heard and witnessed inside the truth about one’s own life — is the only real medicine of grief. 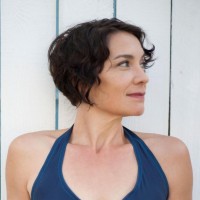 Megan Devine is grief therapist and the author of It’s OK That You’re Not OK: Meeting Grief and Loss in a Culture That Doesn’t Understand (Sounds True, October 2017). For more, visit refugeingrief.com.

Previous Post: « Integrity as Your Beacon | What Our Bodies Tell Us About the Choices We Make
Next Post: Letting Everything In and Through | Explorations of the Human Experience »