When her life came crashing down, one woman discovered the transformational power of gratitude.

As difficult as it may be, you have to look for things to be grateful for in the negative situation.

Rhonda Byrne (from her book The Magic)

In the winter of 2002, I was a depressed, broke, mature, fat woman, with no job and a husband who had just committed suicide. Not exactly a scenario ripe for gratitude.

The suicide of my husband left me with emotional distress as well as a financial burden. He had been the primary breadwinner, and with him gone, so was over half the household income. The little bit of life insurance he had barely covered his funeral expenses. I still had the house payment, my car payment, his truck payment, the electric bill, the water bill, gas, groceries, and the credit cards.

One month prior to my husband’s suicide, I retired. I was so pleased with myself that having worked as an administrative assistant (secretary) since the year I graduated from high school, I was able to retire at the age of 47. As it turned out, my retirement income was much less than my earned income had been, and not nearly enough to cover the bills each month.

To top things off, my weight was affecting my health and my ability to do simple things, like bend over and tie my shoes. I weighed nearly 300 pounds, and at 5’2” I was, as my mother-in-law had once described me, “as wide as I was tall.”

For months following his suicide, I’d wake up in the morning crying and continued to cry throughout the day. Then I’d cry myself to sleep at night. I no longer had to go to work, so I spent a great deal of time just lying in bed crying.

The only thing I found the energy to do was to keep the appointments with my therapist, but I would spend most of my time in her office crying. After watching me cry for several months she finally said…

“He chose to stop living. You are still alive, but you’re not living. Only you can improve your situation. Find something to do… ANYTHING.”

For instance, you can do the 15-minute practice while taking a walk by focusing on the rhythm of your breath for the first 5 minutes. The second 5 minutes you name things you are grateful for, and the final 5-minutes are spent thinking of things you desire to have or to accomplish.

I probably chose the worse day to start my new practice. When I walked out my front door the heat immediately hit me in the face. I looked around and saw nothing but brown grass throughout the neighborhood. I couldn’t remember when it had rained last and everyone’s grass was dying. I thought about turning around and walking back into my air-conditioned house, but the words of my psychiatrist popped into my head: “Do something … ANYTHING.”

So, I walked on and for the first five minutes I concentrated on breathing as instructed. As my 5-minute timer went off, it was time to name things I’m grateful for. But my mind went blank.

What the hell did I have to be grateful for? I could not think of a single thing.

That’s when I looked down and saw growing in a crack in the sidewalk a tiny bright yellow dandelion. For some reason I stopped walking and just stood there looking down. After a second or so I said, “Well, little dandelion, I guess I’m grateful I didn’t step on you.”

In that very second, it was as if the flood gates of emotion burst open.

I cried. Actually, I sobbed. But it wasn’t the cry of depression and despair I’d been experiencing; it was a SOB OF RELIEF. I had finally found something to be grateful for — the tiniest of somethings, a little insignificant weed growing in a crack of the sidewalk — and I was immediately transformed.

Not long after this experience, my first grandchild was born. Now whenever I need to lift my spirits, I choose to think of him instead of dwelling on whatever was getting me down.

As for the third segment of the 15-minute fulfillment exercise, I can’t really remember all the desires I thought about during those walks, but today I have a job I thoroughly enjoy, I’ve lost 100 pounds, I have a beautiful new dream house, a new husband who loves me very much, and seven beautiful grandchildren.

So, how does a depressed, broke, mature, fat woman, with no job, and a husband who had just committed suicide turn her life around? It all starts with gratitude. 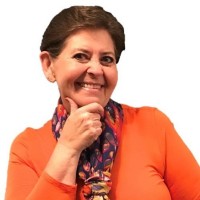 Bobbie C Thompson is a wife, mother, grandmother, and creator of Line It Up – Daily Intentions Planner. Based on the teachings of Abraham Hicks and the Law of Attraction, the planner comes from a series of dreams and can be purchased from Amazon or Vervante Bookstore.

Previous Post: « Swimming for Strength, Injury Recovery, Positivity and Overall Health
Next Post: Tired of Just Doing? Embrace Inaction as an Opportunity to Realign Your Goals »