One man’s journey to finding connection in loss

The time was 2:23pm. Or there about. It’s hard to pinpoint the precise time when you’re in that deep sleep state where time seems not to exist. That’s when Sara passed on…ascending to a new dimension, free from the paralyzed body that imprisoned her for thirty years.

I felt her passage…a swirl of orange light that rose from the lake in my dream and disappeared into the sky above.

Moments later, I was awoken by the vibration of my phone—a text had just come in from my sister, Janet: She’s gone…it was easy for her, but difficult for us.

Sara was the oldest of my two sisters, the ‘Flower Power’ child, the tail end of the peace-and-Aquarius generation which defined the 60’s and 70’s civil rights and anti-establishment movement. She was pretty, funny, creative, smart…and knew how to work a system, including our family system. Leveraging these skills, if there was a way to get out of household chores, she found it, Janet and I covering in an effort to simply “keep the peace”. She wore the bellbottom jeans, tie-died halter tops, sought refuge with a Guru or two in California, and disrupted more than a few family dinners with her indignant antics. Yet she loved and she cared, and taught me the ‘ways of the world’ that would give this young boy a leg up as I approached adolescence.

Memories flooded through my mind during that brief sleep. Actually, it was more of short nap, a dream state alone in my car. I knew she was gravely ill and I was trying desperately to get to Michigan from my home in Woodstock, NY (ironically, the home of the 60’s hippie culture and origin of the famous concert in 1969) in order to be with her. Her smile that could light up a room always told me that she loved that I wound up here. I tried desperately to get to her that day, wrangling airlines and flights like trying to herd a pack of wild cats, but it was futile. I wasn’t meant to be there in that moment and needed to surrender to that. I had been out in California when I received the news of her hospitalization and health condition.

Hour after hour staring up at the airport monitor at my gate, with multiple flight delays and cancellations beyond my control…it was evident that it was not meant to be—at least in my timing or my way. I wasn’t going anywhere anytime soon. In a moment of defeat, I felt called to retreat from the airport, to be somewhere alone. So, with hours to spare, I left the terminal and headed for my car in the parking lot. Exhausted from having battled my way back from California just the night before, seemingly repeating it again this day, and frustratingly deflated from not being able to get where I so desperately wanted to be…I opened the passenger seat door of my car and got in. Reclining the seat, I even amused myself, hmmm, who know how comfortable this seat in recline could be? I glanced at the clock…2:15, set an alarm on my phone to awaken me for the flight and fell asleep instantly.

I went back to Lake Michigan, the touchstone and the location of virtually all of my childhood memories…at least the happiest ones.

While we grew up in the now-rusty town of Saginaw, we had a gorgeous summer cabin on the shores of Lake Michigan—the result of my parents’ desire to forge a kind of utopian retreat, away from the small thinking of the community we lived in and imbued with their curiosity of life. At that time, no one wanted to be on the Big Lake. Summer dwellers flocked to the myriad small lakes of inland Michigan, with boating activities and warmer waters for swimming. My parents’ vision was different. They wanted expansive, raw, quiet open space.

Just after I was born, they bought an inexpensive 40-acre parcel with a quarter-mile of beachfront, nestled in a saddle between two 200-foot high, wooded sand dunes. They named it Paraggi, after the intimate, stunningly beautiful fishing village on the Italian coast that they fell in love with during their travels. Sara painted the sign that greeted visitors at the entrance to our sandy driveway (more of a long, bumpy beach road). It simply read “Paraggi,” painted in pink and orange with flowers in a swirly, 60’s groovy font. It makes my heart beam just thinking of that sign.

Paraggi was a world without tv, without social constraints, without the ‘shoulds’ of normal living. It began as a sandy swath. Then came a modest single room cabin with an out-house. And then a separate cabin with two bedrooms and…wait for it…a bathroom. And years later, a masterfully designed main cabin. All of the structures were built upon deeply buried telephone poles, and ‘floated’ several feet above the ever-shifting dunes that confounded most architects. The structures were connected by a series of decks—named ‘the aft deck’, ‘the poop deck’ and ‘the main deck’—nautical terms inspired by my father’s love of sailing (though we never had a boat). My parents were visionaries in their own right.

It was on those decks that the countless conversations of life unfolded as we watched the summer sun set over the lake, or dramatic storms approach from the west. It’s where I tinkered with my minibike, sipped my first beer and learned about girls. In the screened-in porch, we read comic books in the rain, played cards ‘til 2am and slept in sleeping bags ‘til noon. It’s where I connected to nature, explored woods for hours on end, and everyone freed their mind. My father was reading Deepak Chopra before he had become, well, ‘Deepak Chopra’.

With all this family connectedness, you’d think we siblings would become close-knit in our adulthood. We didn’t.

We loved each other deeply…and still do…but that tight, know-every-life-detail kind of closeness was not what my parents sowed. Quite the opposite—they actually eschewed those uber-close tightknit families…they thought they robbed children of their innate rugged individualism. They would hold our cousins as examples. Maybe they were right, maybe not…I was a bit of a celebrity among the cousins for leaving Michigan and branching out to California, New York and beyond…but as we matured, it sure seemed like those cousins were enjoying life surrounded by family and traditions, while we were all dotted across the map, connected by infrequent phone calls and even less frequent visits.

For Sara, that distance felt more like isolation during the many years following a car accident that left her paralyzed and wheelchair-bound—although amazingly alive—three decades after as she swerved off a rural road to avoid hitting a deer in the dark of night. The car rolled down a ravine and landed in a tree. Sara, with no seatbelt on (mercifully), landed in the brush and was identified by a hunter in the early light of dawn the next morning. She survived and beat many odds along the journey, including getting to meet and have a relationship with two beautiful grandchildren. Fortunately, in recent years, her daughter Heather, a lovely and caring only child, moved close by and was able to help her during her the later years of her life journey.

So here I found myself, resigned to my car with my inability to get to Michigan—trying to get to Sara…to hold her hand one last time, to tell her I love her, to say goodbye to her lifeless body that lay there unconscious before they turned off the machines sustaining her. When it became abundantly clear that that wasn’t happening and that she would likely be gone before I arrived, I still yearned to get there to hold Janet who had made it there in time and my niece as she said goodbye to her Mother. But I was grounded. Even driving there at this point would have been futile, an 11-hour journey.

Hope springs eternal. I held out. Waited. Was determined to get there. God, the Universe, my angels, maybe my sister had other plans for me.

I never made it to Michigan that day, but something more miraculous had unfolded. Sara met me on the deck overlooking the lake in my dream. She came to me as if to say, it’s okay little brother. I’m free. I love you so much. Live your beautiful life. I sobbed and grieved and laughed. It was one of the most profound spiritual experiences of my life.

I could’ve easily missed this. In fact, the old version of myself would’ve. I received this sacred gift of connection from my sister because I was open to receive…because I listened to myself when I felt called to leave the hustle and bustle of the airport, and to retreat. For whatever reason(s) I wasn’t meant to travel that day. And those details don’t really even matter. I could’ve chosen to get all worked up and upset, resisting. Or to be curious about why events were unfolding as they were…and go with the flow. I’m grateful I chose the latter.

In hindsight, as I reflected upon this, I knew that it was a slice of grace that could’ve easily slipped through my fingers.

I wasn’t distracted and instead sat in the presence of my pain there in my car, divinely connected with my family and my sister as she left her body.

We are surrounded by the mysteries of life and if you are anything like me, you’ve likely taken for granted the interconnectedness we possess. But not anymore for me.

I share this deeply personal experience because it reminded me how to live. It reconnected me to the people and places I value and love—and it demonstrated how to follow my intuitive hits and show up for myself. Don’t miss yours.

I made it to Michigan the next day, this time on a flight only slightly delayed—and for whatever reason, that was divine timing. I spent a short, yet deeply moving and fully present time with my small family as we remembered and celebrated Sara’s life in our own way. Through tears and laughter and togetherness, we began our healing.

Sometimes (probably all the times) we don’t get to define the terms of our ‘goodbyes’, but it is my belief that when we can release the need to control what that outcome should be—we avail ourselves of something far greater. Connecting to Sara in that way, in that moment, in that car, was the greatest gift I could’ve received.

Life. It is meant to me tasted, experienced, felt. Not to be rushed through.

Thank you for meeting me on the deck, Sara. I love you too. Rest in peace sister, you are free. 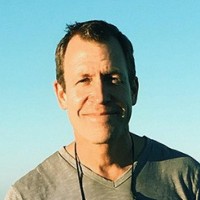 Previous Post: « How Not to Lose Your Temper: 3 Simple Tips to Reduce Anger and Calm Emotions
Next Post: Lost and Found: Bewilderment as an Invitation to Transformation »