In the workplace and beyond, embrace resistance as a tool, as a valuable intuitive guide, giving you direction and clarity

Resistance is a hot topic with business owners and creatives.

You can find hundreds of books written about it. Questions that commonly come up are: How do I work with resistance? How do I deal with it? How do I make it go away?

Resistance is part of your ecosystem — an important part. It’s part of all our lives and it comes in many different flavors. General attitudes towards resistance range from wanting to stamp it out and make it disappear, to how to work with it and use it beneficially.

For some, resistance hangs out, lurking in the corner. For others, it feels like resistance is like strings tangled in their limbs that holds them back from taking the next action they know is necessary.

If you’re one of the people who feels all sorts of flavors of ‘ick’ when you think about resistance, take a moment to ponder how resistance might be a tool to guide you. How might it be something to experience that helps you take an important step towards where you want to go?

In learning how to identify what form of resistance is arising, it’s helpful to think about it from the perspective of the natural world. Identify resistance through the feeling in your body and the emotional quality felt around it. Pay attention to when it arises and how you feel when it comes up.

There are three major types of resistance that people experience:

1. Resistance due to growth

This often comes up when someone is taking new steps in their business or creative projects. When next steps are unclear or haven’t been taken before, threads of fear and discomfort in the unknown come up. Depending on the level of discomfort or uneasiness, it might feel like a barrier to taking the next step.

Think about a seed that sprouted and is reaching up through the soil, pushing through rock, silt, sand, clay and organic matter to reach the sun. This is a new, fresh shoot of growth. It’s not particularly strong or experienced, but it makes its way through the matter encompassing it. It uses the beacon of light above to guide its direction.

When experiencing resistance due to growth, ask yourself what wisdom do a seed and its new shoot have to give you? How can you move toward your goal and the growth required to reach it?

2. Resistance due to avoidance

Resistance due to avoidance is often emotionally-tinged. It comes up when you want to do anything except the thing you know needs to be done. Maybe you end up spending your time getting in-depth information about your friend’s latest gizmo, or diving into a new and urgent research project about the day’s Google doodle.

This type of resistance is multifaceted because of the variety of emotions that might surface — such as that squirrelly feeling that arises like your insides are trying to run away from each other, but there’s nowhere for them to go.

Resistance might look like a scenario where you don’t want to email a customer who’s been having issues with a product; you’re trying to work out a good solution, but you also don’t want to create a ton of extra ongoing work for the team.

It might look like not wanting to have a conversation around boundaries with a client because you’re afraid to lose their business.

It might look like not wanting to email a potential partner and ask for support because you’re not sure how they will respond and feel uncomfortable asking for help.

In each of these scenarios, there is a pointed level of avoidance.

Think about any shelled critter that comes to mind. As soon as you get close, quick as lightning, the little creature disappears into its shell, not to come out while you’re still looking or even breathing in its vicinity.

How do you work with this avoidance resistance?

Be present and aware of the avoidance and accept what is coming up. Next, tune into the feelings that are behind the avoidance. Honor these feelings knowing that they may be rooted in past experiences or fears that you harbor. Sometimes it’s helpful to play out the scenarios through visualization. Ask yourself what will happen if it goes the way you want it to? What’s the worst that can happen if it doesn’t? If you are a verbal processor, talking it out can also be particularly helpful.

3. Resistance due to nonalignment (the wrong thing or wrong time)

This type of resistance can often be the most challenging to identify. It’s a very personal type of resistance and one that is best identified from within. It might be something that someone who loves you and knows you very well can point out, but generally, only you will know this.

Here’s a personal example: When I was in my early 20s, I received a full-ride scholarship to get my masters degree at Trinity College.

While on a personal retreat, I realized that this was not the right path for me. From all perspectives, it looked like a great opportunity — but every time I thought about it, I felt heavy. There was something about it that didn’t feel right. So I decided not to go. In hindsight, I’m glad I followed my intuition. From the outside, who would have told me not to do it? Likely, no one.

Many feelings can come up when something is not a right fit. They might be languishing, a sense of something being soul-sucking, a low-grade dread, or a feeling of wrongness.

Think about it like an ice flow or even a glacier. Water comes into a location and then freezes. If there was a path, sometimes the way is blocked. Something so hard is blocking a path that there’s no way through. You have to go another way.

You can also think of what it might be like if someone picked up a penguin from the Antarctic and dropped it in a jungle near the equator. That penguin might have a challenging time adapting to the environment because it’s not in the place it was created to be in.

What type of resistance do you encounter most often? How would you like to meet resistance when it arrives the next time?

What are some ways that you can creatively work with resistance — so it becomes a way for you to be more present and engaged with life?

The next time resistance arrives in your experience, stop and check in with yourself about the type of resistance that is present. Tune into what it feels like and the message it has for you. With an awareness of how resistance is moving through you, you’ll be able to work with it, rather than against it. 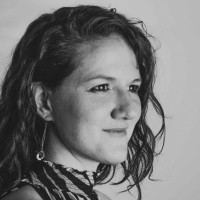 Justine Pattantyus is a writer, photographer and nature lover. She mentors and guides visionaries with big dreams who want to enjoy the journey. Connect with Justine at justinesparks.com and on Facebook.

Previous Post: « Divine Alchemy | A Journey to My Authentic Self
Next Post: What We Seek | A Lifelong Journey Uncovers a Basic Truth »