Applying principles of A Course In Miracles to the workplace

When my first son was eighteen months old we had him tested for autism. He was slow on motor skills, had troubling sensory issues and, despite the fact that his playmates were already stringing together basic sentences, the only word he could muster was “Hi.” It was literally all he would say, over and over again, all day long.

Out of answers, eventually our pediatrician sent us to a psychologist who ran a number of tests.

Does he accept help solving puzzles?
Can he transition to new activities without clinging to the old ones?
Does he get overly upset if his toys are taken away?

There are few things more distressing than waiting helplessly on the sidelines for a diagnosis of your child.

And yet, after weeks of worrying, we were told that our son was going to be fine.

“He appears interested in developing relationships,” said the psychologist. “Children with autism struggle with interpersonal skills, and in extreme cases they fail to see the difference between a person and an object like a chair.”

As a career coach, this struck me as somewhat ironic since it rather fittingly described the majority of my clients’ issues at work. While I was obviously relieved that the appointment went well, I admit I left that day thinking about what a fascinating experiment it would be to give professionals the same kind of test in the workplace that my son had just received in this doctor’s office.

How do we collaborate on puzzles?
How do we transition to new experiences without clinging to old ones?
How do we react when our ‘toys’ are taken away?

It’s strange that the absence of meaningful interaction is considered a medical condition in children, but often viewed as a strength in adults. If you’ve ever been treated by a boss or coworker with no more consideration than the average office chair, then you know exactly what I’m talking about here.

To succeed in business requires the kind of ‘thick skin’ and ‘resolve’ that can often come across as emotionally neutered — and yet anything less, we are told, is ‘soft’.

What’s worse is that we actually believe it. This has led to work cultures where colleagues have a tendency to view each other less as human beings and more as objects along the path to a goal.

Thankfully, there has been a valiant effort to right the ship through the burgeoning field of emotional intelligence (or EQ for short), which is now considered as important as IQ when it comes to career success. In other words, to advance on the job, we have to be smart enough to get in the door, but — once we’re there — we then have to navigate the tricky interpersonal relationships that require a different set of skills.

Since the early 1990s when emotional intelligence started gaining traction in the realm of personal development, there has been a significant focus on the importance of developing EQ for ourselves; however, there hasn’t been much discussion about what happens beyond that. As such, when it comes to the attainment of wisdom at work, we are left to assume that EQ is, well, the end of the road.

I certainly thought so — until I became a student of spirituality and the path of A Course in Miracles in particular. And what I’ve learned from my own practice is that there is a level beyond EQ — namely spiritual intelligence or SQ — that moves us from a place of interdependence to interbeing. Simply put, it’s not enough for me to be smart around you or work well with you — to reach a state of true spiritual intelligence I have to know that I AM you. This means knowing that, while we may have different bodies and different personalities that make us appear to be separate on the surface, underneath those things we share the exact same Source — and that’s what makes us One.

We are accustomed to a perspective of interbeing in our spiritual practices, but we often don’t know how to apply these concepts to our work. Accordingly, we make attempts to compartmentalize our “spiritual” selves and our “business” selves, which often leaves us lacking in both.

This is where A Course in Miracles comes in — and where we can use the Course’s wisdom to create a fuller picture of what it means to be successful that’s worth exploring. As someone who has spent the better part of the last three years translating the Course for the workplace, the most succinct way I can summarize the Course’s impact on your career is this: When you are no longer available for chaotic thinking, the chaos in your life falls away. While the effects of what the Course calls “miracle-minded thoughts” will be external, the cause is very much internal – and very much spiritual.

This is why I believe that spiritual intelligence (SQ) is the next frontier in success — a natural evolution from the foundation of how intelligent we are and how skillfully we can manage our emotions — to how adept we are at seeing beyond our physical sight. Bringing this perceptive to work means bringing more wisdom, more compassion, and a new depth to your being that others can’t help but notice – and want to follow.

You may also enjoy reading Interview: Marianne Williamson | A Return To Love And Consciousness with Kristen Noel 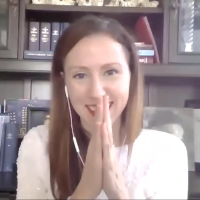 Emily Bennington is a bestselling author and teacher of contemplative practices. Her new book, Miracles at Work: Turning Inner Guidance into Outer Influence (Sounds True, February 2017), applies the wisdom from A Course In Miracles to your career. To follow her blog, Grace, or order Miracles at Work and receive over three hours of free bonus training, visit emilybennington.com.

Previous Post: « Wake Up, Smarten Up, Rise Up | How a Genetic Disability Inspired a Life of Service
Next Post: Bendable Body | True Flexibility Training For the Mind, Body and Soul »