You can’t make change in your life without inviting some form of introspection — and fortunately, this is exactly the purpose of self-surrender

Surrendering is a unique and bizarre experience. Sometimes you don’t have any choice in the matter; life humbles and expands you in such a way that what little resistance there was inside of you fades on its own. But there are other times as a human where you must consciously choose to surrender or continue to resist. Much like riding a skateboard and doing an ollie down an eight-count stair set and falling on your face, elbow or back ten times in a row.

Skateboarding taught me to view the world as an outcast and thus as someone who could consciously choose to interpret the physical and social concrete constructs of roads, buildings and society as locations of abstract creativity and fun.

My earliest experience with this concept of surrender and resistance was at the age thirteen when I first started skateboarding. Or maybe it was the experience of smoking ganja at the age of fourteen and experiencing the chaos of the human mind resisting and trying to make sense of its own inherent need for time and space linearity which was prompted by this body & mind-altering substance.

I don’t follow traditional examples of surrender even though I do love to dabble in the depth of various traditions and cultures. The experience of surrender is quite subjective and can be non-linear; however, there is a certain objective truth in resisting the changes you need to make in your own life. I feel like you can’t make change in your life without inviting some form of introspection — and fortunately, this is exactly what the art of self-surrender allows for.

To clarify the word, surrender here may relate to my experience as a skateboarder and early experiences smoking ganja, but it isn’t limited to this, the English language or the English imagination. Instead, the reference to surrender here that I make expands to the concept and practice of Islam, Isvarapranidhana from yoga and Hukam from Sikhi.

Growing up as a Sikh I was introduced to the concept of Hukam which I understood to mean that there is a free will in one’s life and thus the outcomes that follow. This concept I first observed by watching how Sikhs lived their lives — but then it expanded as I started my self-study of the theology and history. After this I began to see the relation of this concept of Hukam to the humanitarian objectives of Sikhism as a religion and spirituality, which are very much based on the concept of seva or selfless service to other humans that are in need in life by providing basic sustenance.

A monumental change in my life came when I was finishing my formal studies as a historian in college and simultaneously flourishing in my emerging career as a personal fitness trainer and my full-time fascination and practice of powerlifting. I came to a realization, in 2016 when I took a break from everything mentioned above, of how many emotions, experiences and thoughts I had suppressed and not fully digested.

I had lived so much, but I didn’t digest any of it because I never slowed down. This realization brought me into a deep state of chaos and turmoil. It wasn’t until I surrendered to simplicity that peace came back into my life.

What helped bring this idea of simplicity into practice at that time was yoga and the underlying concept of Isvarapranidhana. In my interpretation and experience, Isvarapranidhana means to surrender to the divine will of the universe through the practice of self-realization.

The experience of yoga gave me a deeper understanding of what it meant to truly explore myself without having to concern myself with the worries of others. This sounds selfish but, for me, it is a self-care practice that allows an individual human to understand and prioritize their own existence before their responsibility towards other humans. As a result, this investment into oneself provides greater opportunity to share greater universal energy with other humans; that is, if you can remain unbound to the unhealthy fluctuations of ego, desire and identity.

The most recent evolution in my life came through the introduction of the practice of Ramadan, which I practiced first in 2016 when I dove into the practice of yoga and with it, different forms of poetry and art.

I didn’t know then as I know now how great of an influence Islam would have on me. My interpretation of the Arabic word Islam, the practice and religion itself is surrender; surrendering to Allah in such a way that outward expression and introspection unite in releasing egotistical perceptions. My path and practice of Islam is more inclined with the Sufi interpretation of Islam rather than the practical and traditional understandings of Sunni & Shia. The poetic words of Sufi poets like Hafiz, Ibn Arabi and Bulleh Shah have indeed done something to my soul that I still don’t understand. In fact, it was during Ramadan 2020 that I openly expressed to myself in the art forms of writing and drawing which have now developed into my first book, innocence.

Mysticism continues to influence me to surrender regardless of whether it comes from the outcast ways of skateboarding life, ganja, practicing Sikhism, yoga or Islam.

I can’t provide a step-by-step guide on the concept of self-surrender because I feel that this experience is for everyone to unravel on their own, but I can say there is much value in exploring one’s own surrender regardless of what exactly it looks like.

What you gain from opening yourself to the practice of self-surrender is an unlimited spectrum of opportunities to challenge and explore the objective and your subjective internal and external world while you are still alive in this body.

My experiences with skateboarding, yoga, Islam and Sikhism have continued to inspire me to remain open to the art and practice of self-surrender because I truly don’t know what will happen as a result. What self-surrender means to me is continuously opening myself up to the possibility of chance and allowing myself to learn from every experience. In other words, I remain open to be challenged by life or myself.

I’ve learned it is crucial to learn how to be comfortable with uncomfortable experiences because they are what create expansion and growth.

How I apply self-surrender daily in my life is by having a fixed one-hour yoga practice which includes thirty minutes of asana/ physical postural practice and thirty minutes of meditation on inhaling and exhaling from a seated position. This, in addition to praying five times a day according to Islamic tradition, skateboarding for a minimum of one hour a day, one hour of strength training and thirty minutes of journaling and relaxation are my embodied and applied practices. That is roughly four-five hours daily spent in these applied practices and this is what is defined as discipline. And with this practice, I maintain a constant level of surrender, which I access by continuously challenging and enabling myself for growth and instilling discipline. What I gain from this practice of self-surrender is wisdom — and wisdom is priceless.

You may also enjoy reading A God Box: A Practice For Surrendering Worries & Fears by Kristen Noel 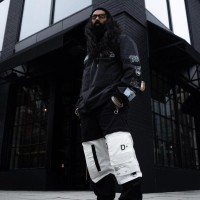 Whether as a mystic, yogi, yoga therapist or through his new book of poetry and short stories, innocence, the author known solely as Deep would like to provide a space and time for others to look within and merge their light with darkness. innocence is set to release September 28 and available for pre-order.

Previous Post: « Following My Heart: A Journey of Transformation & Evolution of Purpose
Next Post: Emergence of a New World Order »