Divorce can be traumatic for both parents and children, but consistent empathy and love can help your kids navigate this trying experience

Many parents are clamoring for answers. As a mom of two toddler boys, I get the need to calm questions with soothing solutions, but here are some lessons better learned from real life experiences than from parenting books.

My parents divorced when I was 3 years old; their separation didn’t bring me peace. Instead, I witnessed conflict and emotional havoc that led me to seek a master’s degree in Counseling Psychology. Those early lessons, coupled with my later professional experiences, have given me insight into the minds of children that I use to parent my own kids today.

Here are 4 things I have learned that may help you navigate the most difficult stages of your child’s life:

1. Love Them No Matter What

Divorce is a difficult thing to go through. It also changes your worldview. When parents are arguing all the time, it can make children feel like they are in the middle and have to choose sides. I had a friend who was going through a divorce. At the time, her son seemed to favor his father. He reacted by being terrible to her and she was understandably upset. When she was at her wit’s end, I told her, “He’s probably just having a hard time with it. No matter what, don’t give up on him. Make sure he knows you love him.” Thankfully, she chose to stay open and loving toward her son regardless of how he was acting. As a result, they ended up growing closer despite the divorce.

2. Ask Them About Their Life (Even If They Act Like They Don’t Want You To)

For my marriage and family therapy internship, I counseled middle school kids — one of the hardest age groups to reach. Their hormones are racing. They’re heading towards young adulthood but are still kids. Your pre-teen or teen may act like they could care less about what you think. After eye rolls and snappy answers, you might want to give up. But don’t! A lot of the students I saw treated me the same way… but it was just a test:

How much are you willing to show you care about me? Do you love me enough to care about my world and all the things in it?

If you keep trying, they will eventually open up. Those years are so tenuous, but if you give up, you’ll lose a window of opportunity to really know your teen.

3. Listen To Them (Even When You Think They Are Being Dramatic)

Adolescence is fraught with extreme emotions. One day, she loves everybody. The next day, she hates you and the world. It’s hard to keep up, but it’s important to listen even when you think they’re overdoing it. I had a client who was suicidal. When I approached her mother, she felt my concern was unwarranted. “It’s not like she’s really going to do it,” she said. Serious expressions are a cry for help and deserve attention. Flippant remarks or an apparent lack of concern — even when it’s not concerning suicide — can push your pre-teen away when they need you the most.

4. Remember That They Still Need You

Your son or daughter may act like he or she is independent and doesn’t need you anymore, but no matter what they say or how they act, they do need you. Sometimes they’ll intentionally push you away just to test you. I had a client who was strong, smart, and appeared older than his age. He never complained, but I believed that underneath all that attitude was a scared thirteen-year-old boy who was waiting for someone to say…

“It’s okay. You don’t have to be an adult and carry the world on your shoulders. I’m here for you.”

Going through divorce is tumultuous for everyone involved. In the heat of navigating life with your new ex — especially if there is irreparable damage from an affair or another event leading to mistrust — it’s difficult not to get triggered or to let go of the need to win every argument to prove you are right. The goal might never be to have a friendship with your ex; the goal might just be to minimize arguing in front of your kids. This doesn’t mean you should forget what happened in your relationship. But it does mean acting like the adult by focusing on the impact of your divorce on your child.

You may also enjoy reading Rescripting Divorce | A Conscious Path to Separation, by Julie Gannon 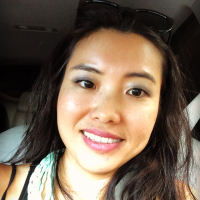 Brandi-Ann Uyemura has been freelance writing for a decade. Currently, she coaches creatives while writing fiction at her home on Oahu. She blogs about the emotional life of a writer at brandi-annuyemura.com and finding your purpose at theinspiringbee.com.