2-Minute exercises that will uplift your spirits and your body, and you can them anywhere (seriously, anywhere!)

Do you have roadblocks that can get in your way of exercising your body? After the birth of my second child I was diagnosed with post-natal depression. I lost what felt like my sanity and my ability to cope. I had suicidal thoughts, my self-esteem was at it’s lowest, I hated myself and I loathed my body. I had stopped making my physical body a priority and as a result my mind and soul were in a terrible way.

When I finally got the courage to go to my doctor it was her words that woke me up to the fact that I had to take action.

“You know how when you get on the plane and they tell you to put on your oxygen mask first before assisting others? That’s what you have to do.”

After that visit I came home and, knowing I only had a few minutes until my children returned, sat on the edge of my bed to think. It hit me that I had to start doing something that would move me in the direction towards being my best self. There was too much at stake not to. But what was my ‘oxygen mask’? Then, like letters being written up in the sky, through my tears I saw what I needed to do.

MOVE! I had to insert exercise back in to my life.

Straight away my head was bombarded with excuses:

I don’t know how to start

I won’t be able to stick to it

I’m ashamed of my body

I don’t have time

I’ve got too much to do

MOVE, I told myself again.

So the next morning after I made myself the promise to move for two minutes, I put a television show on for my kids, went and stood at my kitchen bench and, despite being the last thing I felt like doing, I began doing some of the moves I used to do on my ballet barre; raising my leg up behind me along with bending and straightening my knee like a ‘plie’. I felt this tiny bubbling of an emotion that I hadn’t felt for what seemed like so long that it took me a while to recognise what it was. It was Hope. I did 10 push-ups at the bench and the feeling of strength through my body very faintly sparked an inner strength that I thought was lost. It was only two minutes until my daughters called out that they needed something but that was all I needed.

There was born my ‘2-Minute Moves’; my do-able small step that my excuses couldn’t get in the way of.

I didn’t need to leave the house, be away from my kids or have any equipment. I didn’t need to talk myself in to doing something that seemed too big and too hard. I only needed the space of a yoga mat and best of all, I could fit it into my day.

From the small steps I was taking, I was getting physically stronger in my body, making me feel stronger in life. I felt like I had the strength to cope with things so much better. I was standing up straighter, which made me feel more confident. To be able to see muscles appearing on my body was the sign to me that I was taking care of myself and so my feeling of self-worth was coming back. I was more fit so I had more energy to go after what I wanted to happen in my life. Each time I moved my body I felt the fog clearing in my brain. I was able to gain perspective and work through my thoughts.

As a self-described ‘all or nothing’ person, it was a challenge at first to embrace this idea that something was better than nothing.

But doing nothing had led me to a rock bottom place I didn’t want to visit again, so I began living the philosophy of letting go of my exercise ‘rules’ and grabbing moments to get moving in my kitchen, around my house and while out-and-about. This change of mindset saw a return of my sanity, confidence and vitality — and exercise became a non-negotiable part of my life. Now whether things are going great or the shit has hit the fan, I know a small step that will help me live my life the way I want to.

Like others, I battle with excuses every day. I still sometimes feel guilty taking time out for me, think I can’t possibly fit it in, get down on my body image and feel like I just can’t be bothered. But when I know the ripple effect of exercise for me means I want to dance around the living room with my kids, do handstands on the beach, prepare nourishing meals for myself, be intimate with my partner, say no when something doesn’t feel right and talk to myself in a way I would talk to my best friend — then I do whatever I can to make it part of my life. Even for just 2 minutes.

You may also enjoy The Power of Movement, and the 5 Minute Workout Erin Stutland 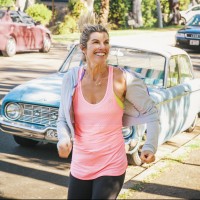 Lizzy Williamson helps people around the world to fall in love with fitness, two minutes at a time. Join her Free 5-Day ‘2-Minute Moves’ Challenges and find out more at twominutemoves.com